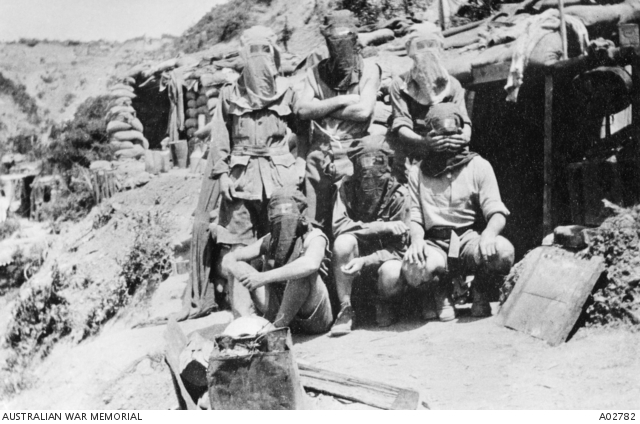 Six members of the 1st Divisional Signal Company wearing their gas helmets - a gas
scare surrounded the 7th Battery gun pits on the 7th October 1915 (below).
[Courtesy of Australian War Memorial - A02782]

To-night there was a demonstration by our forces against the enemy’s trenches but nothing of a decisive nature. A very bombardment took place on the Southern end of the Peninsular and the booming of the heavy guns was very pronounced.

1500 Gun observed firing from GUN RIDGE at our aeroplane.  Reported to 3rd F.A. Bge, but had ceased fire before report through (Sq. 68-S-5).

19.30 Reported by Np. 4 gun that the presence of small quantities of gas had been noticed in the air.  Infantry + Light Horse forward trenches did not confirm report.  3rd F.A. Bge was informed + no action was accordingly taken beyond warning men to have respirators or gas helmets at hand + warning other units of report.  Officer in charge of No. 4 gun stated men’s eyes had been made to smart + smell noticed was disagreeable but was not sufficient to overcome anyone.

1430 Convoy of Camels on road going towards RUINS

1435 Convoy of horses on road behind GUN RIDGE going South.

1520 Camel and horse Transport moving North on road at foot of KILID BAHR.

1615 Number of men on foot travelling along road at foot of KILID BAHR going North.

Comparatively quiet throughout the day.