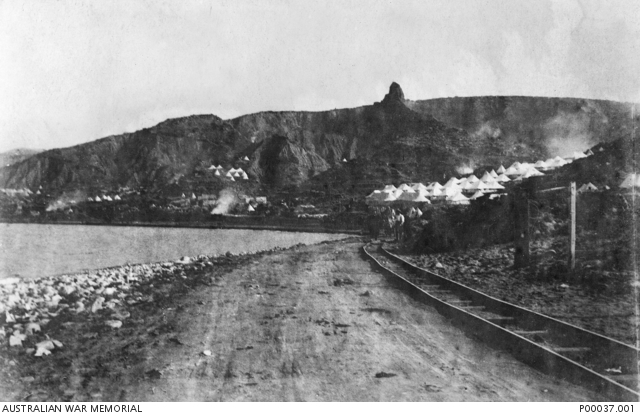 Anzac Beaches Area, October 1915. The light railway line used to move stores between
Anzac Cove and North Beach as seen from near Ari Burnu. Note the tents of the
Casualty Clearing Stations and Field Ambulance Units including the largest, in
Reserve Gully, in the middle of the photograph with the Sphinx above and
Walker's Ridge to the left. The original caption reads `Walker's Ridge taken
from Casualty Corner at Gallipoli giving a good idea what our fellows
had to climb'.
[Courtesy of Australian War Memorial - P00037.001]

Captn Crisp told me to hang on to my position & work in Store at present – the Q.M went into Sergt Major Runcorn’s Dug Out. So far I hardly know my position. Had long chat with Corp ted Coleman. Went to ordnance again & “Beachy" was acting. I had to take refuge in dug out on beach. The Turks seem to have a fresh lot of ammunition now as their guns are more active.

0100 Gun from OLIVE GROVE firing on BEACH sounding like RT.SEC.

1115 Guns from both RIGHT AND LEFT SECTIONS OF OLIVE GROVE fired on BEACH.

9th.and Heavy Batteries fired in retaliation and warships fired on trenches in rear of GUN RIDGE.