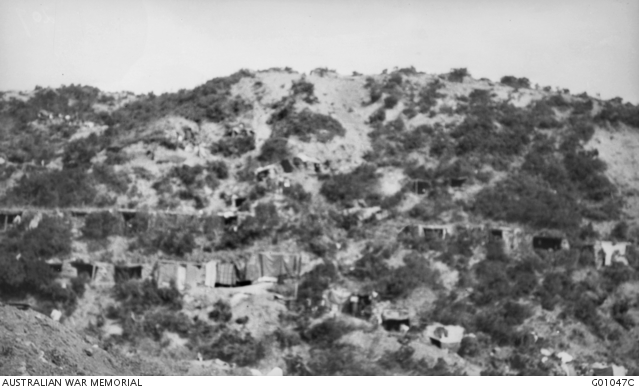 Two terraces at Anzac overlooking the beach, the site of Headquarters and offices of 1st
Division. Captain C. E. W. Bean's dugout was marked by a plaid rug, Colonel Austin next
door under tarpaulin, & kitchen to right front. Officers Colonel Foott, Major Griffiths (whom
Will Sparkes met below), & Colonel Howse were above Bean to the left, whilst Major
Glasfurd, Lieutenant Casey, General Walker, & Colonel White were to the right.
[Courtesy of Australian War Memorial - G01047C]

It was nice and crisp. I had a busy day. Went Ordnance for blankets etc. Saw Stan Shooley again and called on Major Griffith re appt.

0410 In accordance with orders for a demonstration No 3 Gun opened fire engaging enemy’s trenches on LONE PINE firing 15 rounds.  An enemy’s gun firing from the direction of GUN RIDGE attempted to engage our No 3 Gun firing 6 rounds without causing damage.

1100 Enemy’s aeroplane flew over our position Northwards + was engaged by a gun from a warship + was put to flight.

1040 Enemy aeroplane flying across our position.

1200 WINE GLASS BATTERY firing on trenches to left of F.C.O.Station.