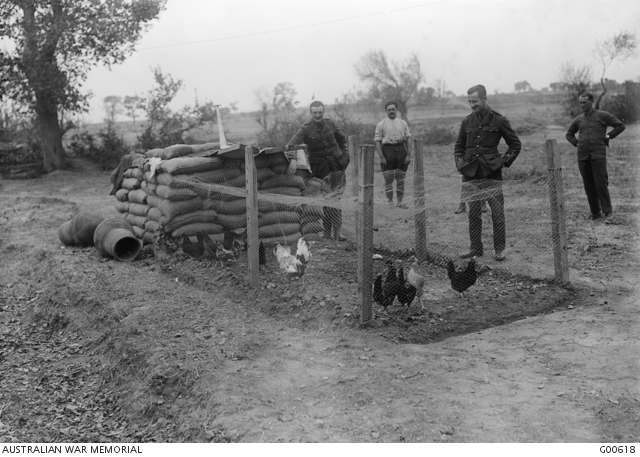 Eggs were a much sought-after delicacy amongst the Australian trenches at Gallipoli
(below) - British officers of the Royal Naval Division kept chickens near their dugout
on Anzac, and were thus supplied with new laid eggs each day.
[Courtesy of Australian War Memorial - G00618]

The day opened up nice & fine. The ocean looked very calm & peaceful in the distance. Recently we have been able to obtain eggs here at 2/6 dzn & it is wonderful how palatable they make anything. I have boiled a little condensed milk mixed with water and this with heated up eggs & cornflour made a delicious dish. For a change beaten up eggs & flour fried in fat was also added to my menu occasionally. I am now more able to do a little cooking having the cook house near my store. There was a good deal of shelling in the afternoon. Our guns exchanging shell for shell with the enemy. A burst near the 7th L.H. trenches caught 9 men about 4 of whom were considered mortally wounded. I had a bad toe – it was really a corn which ached very badly & I felt a bit off. Rumour has it that the Navy will force the narrows on Tuesday m=night.

17.25 Gun observed firing at our aeroplane.

1100 Flags flying at Gully to right of WHITE RUINS.

1623 Traffic on road at foot of KILID BAHR on Southern Section.