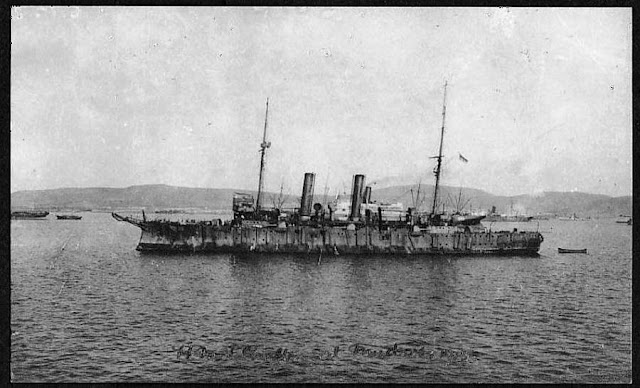 The H.M.S. Grafton, one of the "bulge cruisers" sitting off Gallipoli - Major Hughes makes
reference to the Grafton firing on Turkish positions on the 21st October 1915 (below)
[Courtesy of Gallipoli Association]

It was a crisp nice day. In the morning I was along to Ordnance.

0805 Party of men and horses behind Centre Section of Olive Grove.

1220 Gun from Olive Grove firing on beach consider to be Left Section.

1404 About a dozen or more Camels to the Left of North Maidos Road.

1630 Monitor engaged Target of yesterday in Sq 38.R. whilst Grafton ,engaged another target apparently an earth-work on coast east of Monitors target.