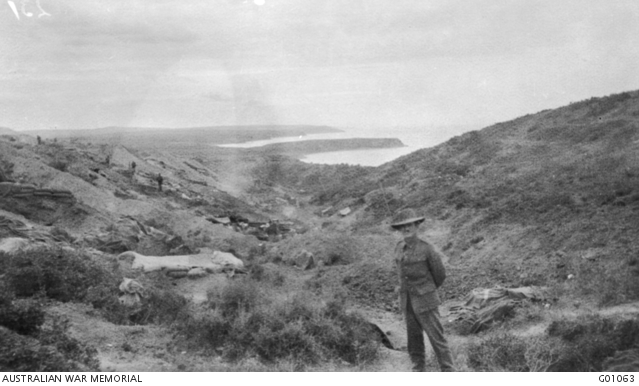 Looking down Poppy Valley to Gaba Tepe at Anzac in October 1915, the new line
being shown on the left and the old line on the right. This valley was enfiladed by
the Turkish guns at Olive Grove. In the foreground is Lieutenant Bert Lowing, of
the 6th Australian Light Horse.
[Courtesy of Australian War Memorial - G01063]

It was overcast again to-day and very cool. We were Subjected to a lot of shelling early in the day.

0815 No. 3 Gun in, in retaliation to enemy’s fire fired 27 rounds at parapets on SNIPER’S RIDGE with effect.

0930 A number of Transports ( stationary ) about 3 deg left of Achi Baba on the forward slope of the hill.

1315 Gun from Olive Grove firing on the beach.