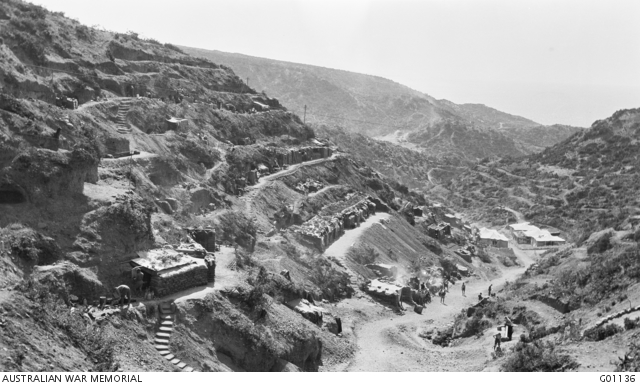 The only canteen at Anzac, established by the YMCA near the tents on the right, photographed
in October 1915 - Will Sparkes repeatedly took advantage of their wares (below).
[Courtesy of Australian War Memorial - G01136]

It fined up to-day a little but still it was overcast & windy. Had a trip to Ordnance & saw Owens of YMCA who run a Canteen Store with goods from Embross Isld. He makes trip to & fro every week. A big crowd was there but I managed to get inside knowing Owens & secured some cakes & tin fish are delicious quite in this region. Going along the beach to Supply about Sundown “Beachy" opened up on our party & sent several shells at us. There was a scramble for shelter on the high banks & we had to hide there for some little time & then venture forth one at a time. It was the number together that attracted the shelling & luckily no one was hit. The scramble on top of my tea rather interfered with my digestion. I saw Captn Brunditt a Brisbane chap I knew well to-day. He is with the 5th Light Horse. Our rations are now wonderfully improved. We get fresh meat & Bread almost every day or two & I often wonder if it is too good to last.

A ration of wood 1 lb per man at present a daily occurrence whereas before we were lucky to get any. There was occasionally an issue about once a month. All the wood has to be brought in as this country is devoid of trees. It is all undergrowth & brushwood holly etc. There was such a scarcity of fuel that we had to resort to grubbing out roots of the shrubs & burn them with the aid of a little piece off a case the rations arrive in.

The other day I managed to secure a few eggs & as our cooks had erected an oven made up a bread pudding – one of my old favourites.

1040 Heavy and 9th.Batteries firing on WINE GLASS RIDGE no retaliation.

1350 Party of men working on trench East from WINE GLASS