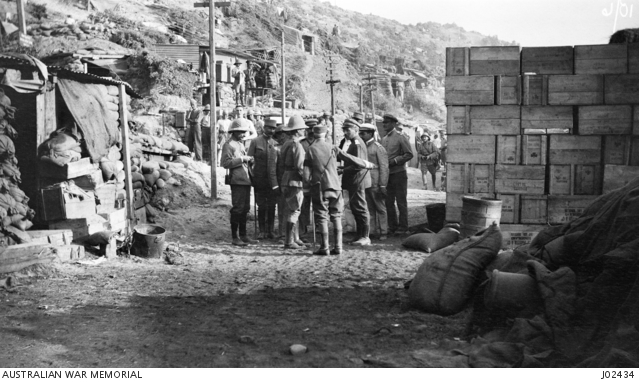 Obviously unbeknownst to the men in the 7th Battery gun pits below - the French General
Bailloud, Vice-Admiral Boui De Lapeyrere and Staff Officers with General William Riddell Birdwood and the Earl of Anglesey, mustered on the beach at the mouth of Anzac Gully just
prior to their departure, after an inspection of the Anzac positions on the 2nd October 1915.
[Courtesy of Australian War Memorial - J02434]

Another quiet day. I went to Ordnance for Battle Lamp glass & wick. Saw Major in the afternoon. There was an attack during the evening & a lot of rifle fire.

10.40 No 3 gun fired 3 rds P.S. (Range 940x) at Turkish Observation Station pointed out by 10th Battalion observer – Sq. 68-B-6 in retaliation for enemy gun firing on LONESOME PINE.  Effect – Parapets damaged.  Enemy shell burst in gun pit of No 3 gun but caused no casualties to men or equipment.

In pursuance of orders received from Div.Arty. H.Q’s we proceeded to replace 80/44 fuzes on H.E. shell by 85 fuzes removed from shrapnel shell temporarily transferring 80/44 fuzes to unfuzed shrapnel shell as protection from damp pending receipt of new 80 or 85 fuzes.

1020 Gun from behind GUN RIDGE firing on 7th. Battery.

1130 Our Batteries set something ablaze in vicinity of WINE GLASS.

1550 Gun from left of GUN RIDGE firing on ARTILLERY ROAD rear of F.C.O.