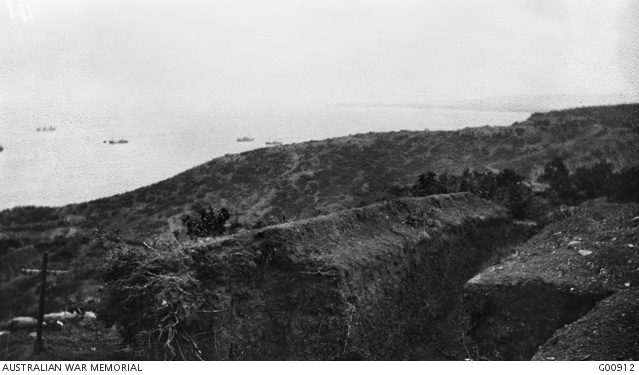 A trench on the Razor Back overlooking White Valley, in October 1915.  There were a
few scattered trenches similar to this in the scrub but the Turks seldom attempted to
defend them.  Many of the trenches were well constructed and often hidden with
brushwood.  This material, when dry, turned brown, the result being that a dry,
brown line through the scrub always indicated a trench.
[Courtesy of Australian War Memorial - G00912]

Quiet – except the usual daily shower of Bullets & shells.

1530 No 3 Gun opened fire on a trench mortar pointed out by the 11th Inf Battn on SNIPERS RIDGE – Sq 68-9-8.  26 rounds were fired but owing to the flatness of the Trajectory of the gun the effect was slight.  During the series the enemy’s artillery opened fire on our No. 3 Gun with one gun from GUN RIDGE + the other from the direction of SCRUBBY KNOLL the latter gun doing some damage to our parapets + unless soon located + silenced will cause us some inconvenience.

1900
0804 Hospital at foot of Kilid Bahr completely removed through the night.

1530 7th & 9th Batteries firing on Snipers Ridge and Razor Back.

1600 Gun from Right of Left Section of Olive Grove firing towards 9th Battery.

During the day a fair amount of work has been done their, a lot of new earth can be seen.Horsemen came their from direction of Achi Baba.

1545 Cruiser fired one round at this target and men were seen about 50-60, running in all directions, also a few horsemen galloped away in the direction of Achi Baba.

Pack horses also are lead to and from this position there appears to be a road from Achi Baba to Kilid Bahr passing this position as men are observed coming from the direction of Achi Baba and going towards Kilid Bahr where they are lost to sight in a sunken road.