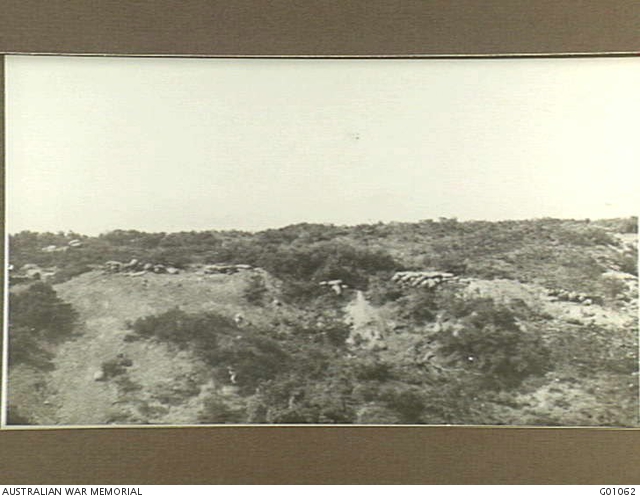 The firing line on Bolton's Ridge (along which the 7th Battery's guns were
entrenched),  from the Turkish trenches on Silt Spur, after the line had been
advanced across the Gully - October 1915.
[Courtesy of Australian War Memorial - G01062]

It threatened rain all day & towards evening the wind rose & lightening lashed in the S. Western portion of the heavens. I had secured our supply and conveyed all the goods to the store by the mules and had just returned when the rain commenced to pour down accompanied by strong gusty wind. I was anxious about the roof of my dug out store standing as it was only Water P sheets & blankets. Fortunately it stood the test but I was up most of the evening catching the drops of water as it leaked through in various places. To catch the water I had large Dixies we make tea in & I emptied several of these during the night. It eased off towards the morning & I fell asleep very tired but satisfied I had protected the bread & other perishable stores.

12.30 Vehicles observed moving to and from direction of Maidos, along Maidos Road 48-D + F.

17.45 No. 3 gun fired 2 rds. P.S. at sandbag emplacements on SNIPERS RIDGE, Sq. 68-B-6-8 (Range 775x) in retaliation for enemy guns firing on LONESOME PINE.  Portion of parapet was knocked down.  A Turkish gun engaged No. 3 gun from behind GUN RIDGE with 5 rds. but did no damage.

Work on pit was commenced but had to be abandoned at 20.30 for the night owing to a violent rain storm.  The pit is being built to allow the fire of an additional gun being brought to bear on SNIPERS RIDGE, slope + crest of PLATEAU 400, if necessary, and had to be sited in the dark by compass bearing as position was exposed to view of enemy’s trenches on crest + slope of PLATEAU 400.

1745 Gun from the direction of SCRUBBY KNOLL firing on trenches left of front of F.C.O.