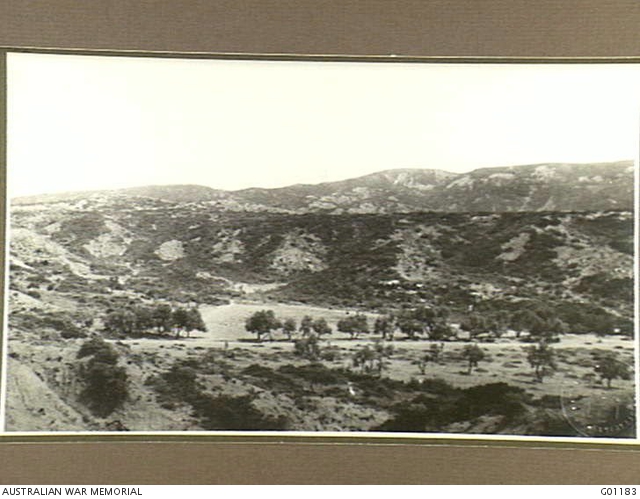 Last night there was severe rifle and machine gun fire and also the Turks threw many bombs.  No. 4 gun put in some very good work and the Turks soon quieted up.  The Inf. General gave the 7th Battery great praise again and the other Generals also.  Yesterday two Turkish women were captured; they were sniping at our men.  A lot of mules were captured off the Turks.  I heard a cobber in the B.A.C. that Bob Ralfe was wounded in the thigh yesterday on the beach.  He has been here about a month and I hadn't heard of him or seen him.  He was temporarily attached to the D.A.P. and for the last few days had been run down in health.

A windy blowy day and much cooler. It seems from all appearances that a terrible mess has been made by our leaders in the campaign here. Everything points to this. I hear our casualties in this new development have been enormous and yet we seem no nearer the end. Something is radically wrong somewhere. Yesterday one of our observers spotted a large number of Turks organising apparently for an attack and instantly one of our guns poured into them about 8 high explosives with great effect. They scattered in all directions. The force against which it was thought the attack was to be made was a ridge called Lonesome Pine and it has been a source of danger as it was not too strong since we had captured it. The odour from the dead is very strong and no doubt the hot oppressive weather has accentuated the decomposition of the bodies.

enemy gun replied with 14 rounds against our No 4 Gun

1755 2 rounds shrapnel at party in communication trenches SNIPERS RIDGE.  Congratulatory message received from Gen Walker o/c Division on support given to Infantry + work of Battery during operations on LONE PINE.

Today we commence our 17th week in Gallipoli. Gen Hobbs consulted me today regarding employment of 3Pr naval guns which are expected shortly. He agreed with my suggestion that they should be grouped with 18pr Batteries in pairs under Battery Commanders. If we can succeed in getting the required number they will be of great value. Getting our new telephone lines and permanent poles established. Good progress made. Big mail in. No letters from home, only two papers from Nell. Miss Cowlishaw wrote me on May 21st. letter has been chasing me round and only reached here yesterday. Generally had a quiet day though the enemy shelled our Lone Pine position consistently for an hour, one man only being killed. We discovered a nice new gun emplacement yesterday, so Burgess let off a few rounds of H.E. shell and completely demolished it. Our H.E. is coming forward gradually and is a great adjunct to our usual ammunition. Col White called in to congratulate me on the Artillery work of this flank.

Born in Napier, New Zealand, Thomas Moore emigrated to Australia where he took up work as a Stockman.  Enlisting in Brisbane on the late date of the 16th September 1914, only 9 days prior to the 7th Battery's departure on the A22 Rangatira, he was another of the 7th Battery 'originals,' spending time in Egypt before deployment to Gallipoli.  One of four artillerymen wounded by a Turkish shell strike on the 7th Battery's No. 2 Gun on the 11th August 1915, Gunner Moore was immediately transferred to the Hospital Ship Valdivia alongside his critically wounded mate Bombardier McKinnon, suffering from shrapnel wounds to his abdomen.  Watching on as his mate passed away & was buried at sea, Thomas held on for four more days as the Valdavia steamed towards Alexandria, Egypt.  Unable to hold on any longer, Thomas succumbed & passed away on the 15th August, just 2 days short days before his 28th Birthday - he was buried at sea, presided over by Victorian Chaplain Frederick William Wray, who was also being shipped off the Gallipoli Peninsula with enteritis.

The below stood as Thomas's Will, now held as part of his Service Dossier with the National Archives of Australia, making sure that his mates of the 7th Battery were paid in full for money borrowed during the Campaign: 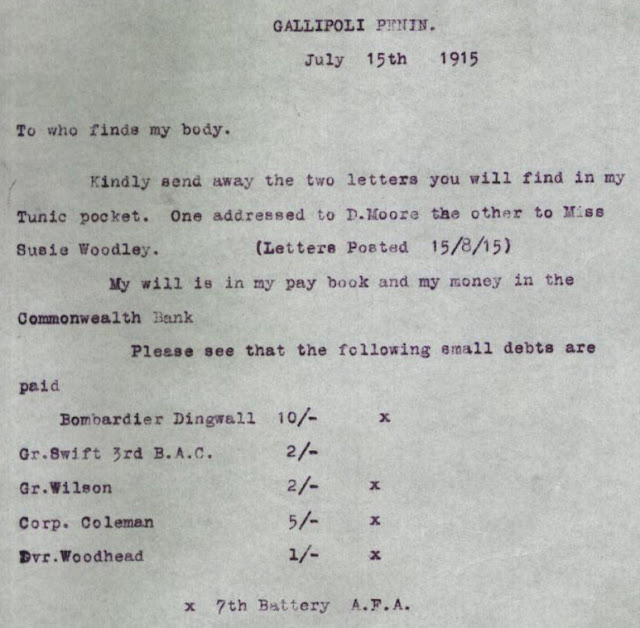