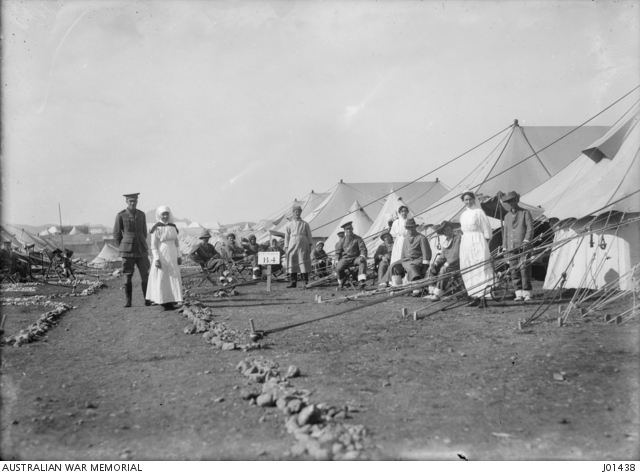 The 3rd Australian General Hospital on Lemnos, where some of the men
from the H.S. Arcadian were disembarked for treatment.
[Courtesy of Australian War Memorial - J01438]

[Author's Note] On about the 23rd-24th August, the Hospital Ship Arcadian, on which Billy was travelling, put in to Mudros Harbour on Lemnos to offload some of the wounded at the new 3rd Australian General Hospital.  Some of those who had not survived the voyage from Gallipoli were also disembarked for burial - one of these unfortunates, 2174 Corporal George Finlay Knight of the 5th Battalion (6th Reinforcements), had been transferred onto the Arcadian on the 21st August alongside Billy, & had died whilst at sea on the 23rd August from severe dysentery.  Unlike the usual practice of burial at sea, Corporal Knight's body was disembarked from the Hospital Ship, & he was laid to rest about the same day in the East Mudros Cemetery. Whether Billy's injuries were considered too severe or not severe enough for admission to the 3rd A.G.H. on Lemnos is unknown, as he remained on board the Arcadian for the next leg of the journey to Alexandria in Egypt.

I could hear a lot of firing early this morning & it was evidently a continuation of last nights affair. As the morning wore on the wind rose and it was blowing fearfully gusty and with heaps of dust making it very disagreeable. We heard that 3 bags of mailing matter for the 3rd Artillery Brigade had got lost or rather sank in a lighter coming ashore. I’m hoping that its not true as I will miss my letters very much. The young Donkey which I mentioned was born some weeks back is growing fast and frolicking around our lines quite at home with its old Mother. A male donkey has joined the mother a few weeks back & our lads make use of it for transport purposes.

Received letters from Nell and Alvord dated July 12th, from North Sydney. At Lone Pine with General Hobbs and Col Johnstone. Instructed to "go slow" with ammunition, supply being temporarily short. Sergt Wallis and Corporal Hare promoted to Commissioned rank. General asked for further names. Purpose commencing a class for their benefit at Brigade Headquarters. Mr Stamps completed repairs of gun for 7th battery. Two 6pr (Japanese) landed. General Hobbs ordered one to be placed in Gun lane near Lone Pine and the Second one at 7th Battery. One is being set up temporarily for trial. A 75 M shell landed into Lone Pine Telephone Station during afternoon, slightly wounding one Telephonist and the shock knocking the other one out temporarily. Very quiet day and night. Strong land breeze blowing, making plenty of dust fly and generally causing much discomfort. Temperature appreciably lowering. My cold rather bad, got the Medical officer to give me some tabloids.

Case of cigarettes received from Lady Robinson, London, 800 packets, which will be much appreciated. Inspected 7th Battery with General.