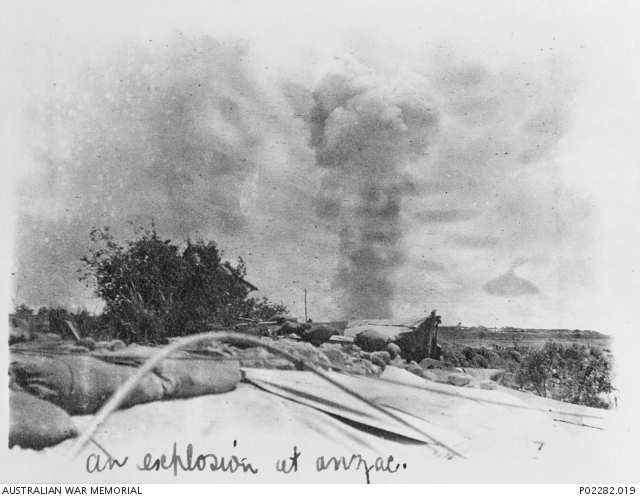 A massive Turkish shell bursting in the Australian lines at Gallipoli - a likely
similar occurrence to the shell that landed near Will Sparkes' dugout below.
[Courtesy of Australian War Memorial - P02282.019]

It is cooler to-day and some of our men are complaining of the chill of the wind. In the afternoon there was an artillery duel – some of the enemies shells falling just over my store. There was the thud thud as one gun fired after the other & the loud cracks as the Turkish shells burst in the air around us. We heard that the new Australian Division which landed below our zone did splendid work yesterday and they had got the Turks moving well.

A tremendous big shell went over us just about sundown and fell 30 yds the other side of the store. The earth rose up fully 100 feet into the air & a large crevass enough to bury a cart & horse in was the result of the burst.

There was a demonstration against certain trenches occupied by the Turks on our right – called by us the echleon trenches. The object was really to see if they could be well defended by the enemy. A good deal of fire resulted and there was several casualties on our side.

When I looked out at 5.45 this morning, I saw 7 Hospital ships at anchor. Evidently the casualties in connection with yesterday’s operations have been very heavy. We received an official message re position on Left Flank, but it is not very clear, and certainly does not indicate a substantial advance. Evidently part of the Infantry of our 2nd Australian Division is now employed in these operations. Arranged with Col Robertson to close and fill up part of a communicating trench adjoining No 1 gun 7th Battery, to enable the detachment to erect a solid protecting wall against Wine Glass and Olive Grove. Also inspected 9th Battalion lines in "Wheat Field". A great deal of work has been done and trenches are scrupulously clean. Their new firing line will be ready in a few days. The 75M Guns from Gun Ridge fairly active. No damage done to us, but three men killed in Lone Pine. 7th Battery carried out an interesting demolition of enemy’s bomb proof positions and protected trenches at S.E. corner of our position on Lone Pine. New gun placed in action at 7th Battery to replace one damaged yesterday. In order to test enemy’s strength on this flank a ruse was carried into effect this afternoon and evening. Howitzers fired a number of rounds, one at least of which fell among our own trenches, and at night rifle fire etc was "let Loose" to draw the enemy. He holds the flank lightly now, his chief aim being doubtless to stop our advance on the left. Wrote Nell only this week.

Hugh Stewart Clark was born in Enoggera, Brisbane, on the 5th November 1888.  A labourer by trade, & with no prior military experience, Hughie (as he became known) enlisted in Brisbane as a Driver in the 3rd Field Artillery Brigade Ammunition Column.  Travelling to Egypt on board the A22 Rangatira alongside the men of the 7th Battery, Driver Clark no doubt built a lasting camaraderie with his fellow artillerymen, before deployment to Gallipoli.  After the disasterous shell strike on the 7th Battery's No. 2 Gun on the 11th August, Hughie was promoted to Gunner with the 7th Battery, & placed under the watchful eye of the Gun's senior artilleryman, Billy Pacey - little could he have known that 10 short days later, he'd endure another shell strike similar to that of the men he had recently replaced.


Just after 10:30 on the previous day, a Turkish H.E. shell struck the side of the Battery's No. 2 Gun, showering the detachments with shrapnel & shattered gun fragments.  On the burst, Hughie was struck badly in the head with fragments of shell - according to Gunner Howlett of the Brigade Ammunition Column, when Hughie was hit he called out, "They don't care who they hit, never mind, give us a fag."  Immediately transferred by stretcher to the beach, Gunner Clark was taken on board the Hospital Ship Formosa, where his condition worsened overnight & he passed away the next day on the 22nd August.  As was the usual process, he was buried at sea.

According to a brief article published in The Brisbane Courier on the 24th September 1915, "Gunner H. Clarke, 3rd F.A. Bde. Amm. Col., reported as having died of wounds on August 15, was the youngest brother of Mrs. F. D. Kennett, East   Brisbane. This is the second brother Mrs. Kennett has lost on the battlefield, her eldest brother, Mr W. G. Clarke, having been killed in action at Onver- wacht during the Boer war."