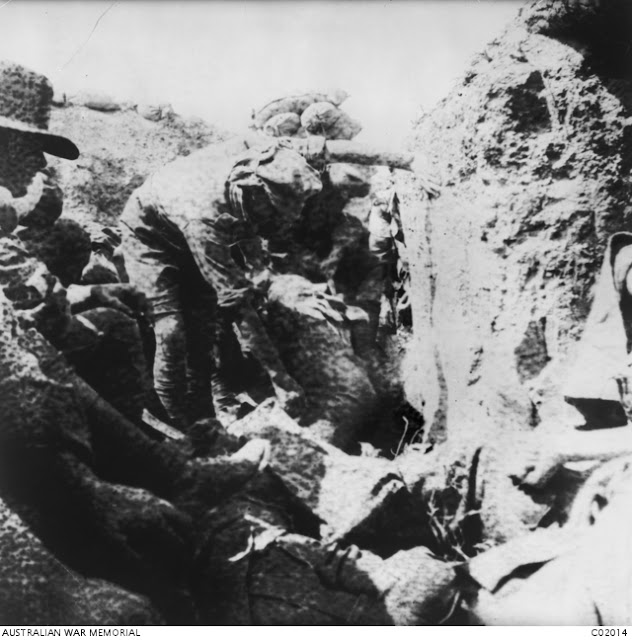 Men of the 1st Battalion burying the dead in the right hand end of the Lone Pine
trenches - the diary entries below all mention the almost unbearable stench from
the number of dead of both sides.
[Courtesy of Australian War Memorial - C02014]

Things are fairly quiet this morning but this evening Br Dingwall let me go down for a swim and I was to bring up a couple of buckets of water.  Well I got down and had a good swim and washed a couple of pairs of socks.  Well I just got out of the water when the enemy started shelling and all round where I was swimming the bullets and shells were landing, then I nearly got knocked when I was coming up the hill.  When I got up to the gun I found that our gun had opened on the enemys trenches and three of the Turks guns had concentrated on our gun and knocked four of the detachment out of five out.  Br Dingwall was hit near the eye, Br McKinnon was severely wounded, Gr Moore was severely wounded and Gr Thurnhill slightly while the fifth man, Gr Hillback got off without a scratch.  So going down for a swim saved me from getting knocked off as my No. on the Gun is 2.  Our aeroplane chased a German Taube that came over this afternoon and the old Taube went for the lick of his life down behind the enemys lines.  Am a bit too busy to attend to the diary.  When we get a land breeze the air is pretty thick from the dead which are lying out in front in thousands, both Turks and our own dead.

It opened up a dull hot day but the firing was a lot quieter. Later in the afternoon the enemy opened up and gave us a hot time while it lasted. It is miraculous how some men escape. A number of shells landed within a few yds of my store. They make you feel a bit shaky I can assure you. The earth went about 50 feet into the air. Unfortunately our Battery had another disaster on No. 2 gun. A shell hit the gun and caught the gun detachment badly wounding Bomb. McKinnon and Gun Moore while Bomb Dingwall & Gnr Thornihill were also wounded. Only one man escaped without a scratch. In these important operations lately our Battery has figured well and the General Commanding gave the Battery special thanks. It has certainly been wonderful how the Battery has got off so lucky. Up till now the Battery has had a charmed existence.

0715 No 4 Gun demolished enemy’s works in vicinity of LONE PINE which had been erected during night.  After firing 6 rounds our gun was fired on by 2 guns + we ceased fire.

1130 4 rounds were fired with same result

1330 3 [rounds] HE were fired at same targets + Turks returned into communication trench where we shelled them with 5 rounds shrapnel.

1540 2 Turkish guns then opened on No 2 Gun + wounded 4 out of 5 of detachments were wounded by HE Shell burst in Pit.  Bom McKinnon (seriously) Gnr Moore (severely) Bom Dingwall + Gnr Thurnhill (slightly).

A very quiet night. Got a very acceptable sleep. Had a look at our newly captured trenches on Lone Pine. Notwithstanding the fact that our men have been cleaning up and rebuilding since 6th August the place is still in ruins and still gives an excellent conception of the damage caused by the bombardment on 6th August. The place is full of dead Turks. We have had large parties on day and night extricating bodies from damaged trenches and burying them, but there are still hundreds to get out. The smell is pestilential. My Head Qrs are distant about 750x and life is hardly bearable at that distance. It will take some days yet before these trenches can be placed in a Sanitary Condition. Visited Col Austin at Ordnance re extra Telephone switch boards. Badly needed. Our relieving medical officer was yesterday so ill that he was ordered off to Hospital and Capt Tozer AMC took his place. During the afternoon a high explosive shell burst in No 2 gun pit 7th Battery, wounding four men, two severely. Our casualties still go on mounting up. I have just heard that one of our gunners on loan to the Indian Mountain Battery was also wounded yesterday. Battle on the left still being vigorously pressed on.

From this extreme flank we can see nothing of the movement and get very little information. In any case we have our work cut out in our own zone. Received cable from Nell from Sydney dated 31.7.15

Born in Wairoa, Hawkes Bay, New Zealand, Ian McKinnon emigrated to Australia where he took up work as a Station Hand at Bindungo Station in Roma, Central Queensland.  Enlisting in Brisbane on the 26th August 1914, he was another of the 7th Battery 'originals,' spending time in Egypt before deployment to Gallipoli.  One of four artillerymen wounded by a Turkish shell strike on the 7th Battery's No. 2 Gun, Bombadier McKinnon was immediately transferred to the Hospital Ship Valdivia with severe shrapnel wounds to his head, where he finally succumbed & passed away at 11pm on the same day - Ian was buried at sea, presumably within sight of his Battery's position & his other fallen mates buried at Shell Green Cemetery.

Tragically, Bombardier McKinnon's mother in New Zealand sent numerous letters to Base Records in Melbourne, in an attempt to first locate her son's Will & in turn recover pay that was owing to him.  On the 8th November 1916, Mrs J. M. McKinnon forwarded a letter Ian had sent to her on 26th January 1915 (published in a previous day-by-day post, here), in the hope of expediting the process.  In her accompanying letter, Bombardier McKinnon's mother wrote:

"Referring to your letter dated the 17th ultimo, I forward you the only letter that I have from my late son No. 1655 Bombardier I. G. McKinnon 7th Battery Field Artillery on the subject of the pay due to him.  In your letter dated 5th September last you suggest that the Will might have been sent to the Military Paymaster Victoria Barracks Brisbane.  Could you ascertain this for me?  Kindly return my son's letter when perused"

Disgustingly, despite specifically requesting the return of Ian's personal letter, the only tangible link his mother possessed of her deceased son after his departure for Gallipoli, Base Records failed to comply & attached the original to his Service Dossier (now with the National Archives of Australia). 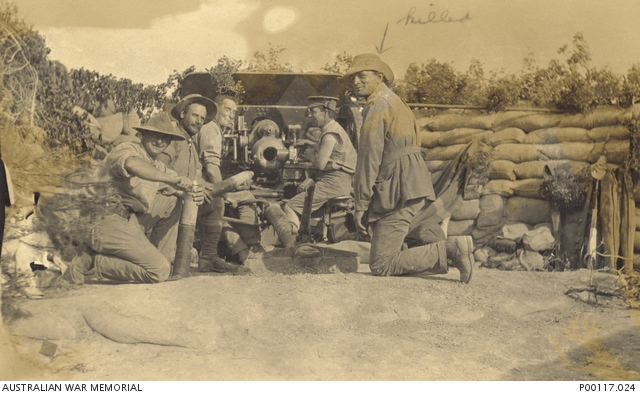 "One of our gun pits.  7th Battery Australian Field Artillery.  The man on the right arrowed
was later killed" -a photo of the 7th Battery's No. 2 Gun, Bombardier Ian McKinnon in
foreground, marked with the arrow.
[Courtesy of Australian War Memorial - P00117.024]