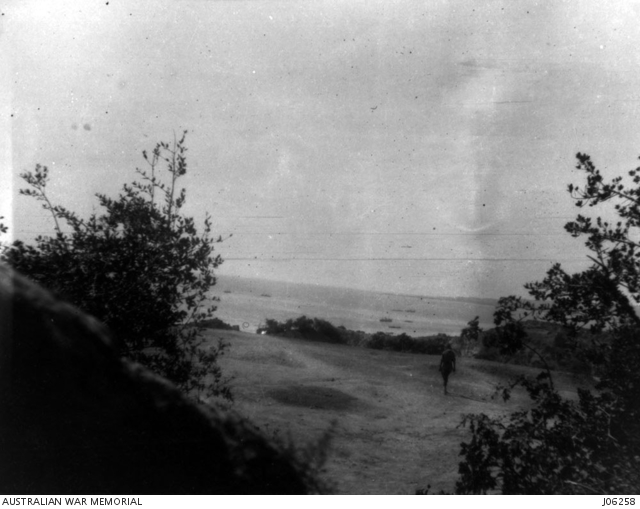 Looking across Shell Green towards the sea in August 1915, from the dugout of
Sergeant H. H. Shelley of the 2nd Light Horse Brigade - shell holes from the ongoing
Turkish bombardment can be seen in the foreground.
[Courtesy of Australian War Memorial - J06258]

Two of the enemys Taubes dropped a number of bombs on the Neba Nesie point I didn't hear if they done any damage.  Jim Milne came down to see me this evening, he is doing well.  There was a bit of a do at about 4 p.m. between enemys guns at Olive Grove and 9th and howitzers.  The 9th Bty blew up the enemys twin trenches.

Still on the oppressive side. Things a bit quieter. I went to Ordnance after dinner. Had a swim on beach. There was about a dozen of us in and the Turks sent a few shells at us. I was not long in getting out of operation and hurried dress under the high bank while shrapnel fell all overhead. One poor young chap in leaving the water got a shrapnel bullet in his leg right on the Shinbone. He was only a few yds from me and it was not till two of his comrades assisted him up the bank that I knew he was wounded. The shells are from our old friend “Beachy Bill" as he is known. Saw Olly Gunderson at the Engineers Stores as I passed through. I secured boots and socks for our men at Ordnance. We saw 4 bombs dropped by a German Taube on to the landing position below us. They were evidently intended for the Battleships off the beach there. Huge volumes of smoke rose from where the bombs struck.

With General Hobbs at Lone Pine looking at depression N.W. of Snipers Ridge and considering possibility of getting guns out that way when we have to advance. I am to get a report from Engineers as to how long it would take to make necessary approach – Gen Hobbs inspected 7th Battery – recommended that SSM Scarrot be appointed R.S.M., and made Warrant Officer to date 12th inst, also asked re acting Adjutant.

Olive Grove very persistent this afternoon. Major Burgess fired about 100 rounds before it was silenced. Am adopting the scheme of shelling enemy’s trenches when their Artillery opens on us and it generally has the effect of silencing them, their troops evidently not relishing being shelled in trenches and doubtless they ask for their own Artillery to cease fire. I shall try the experiment concerning Olive Grove at first opportunity. Major Roberts, 11th Inf Battn brought me in the remains of a bomb sent over his position last night. It furnishes me with another neat little percussion fuze for my collection and a drawn brass cylinder which will make a splendid gong. Lt Turner also brought me an unexploded specimen of 75M shell. I drew the charge and burnt it off. I now only want a 14pr HE, a 14pr Fuze and the Small Hotchkiss shell to complete a very nice selection. Doubtless before this show is finished if I am lucky enough to get through safely I may be able to secure all I want. Understand progress on Left Flank is satisfactory. 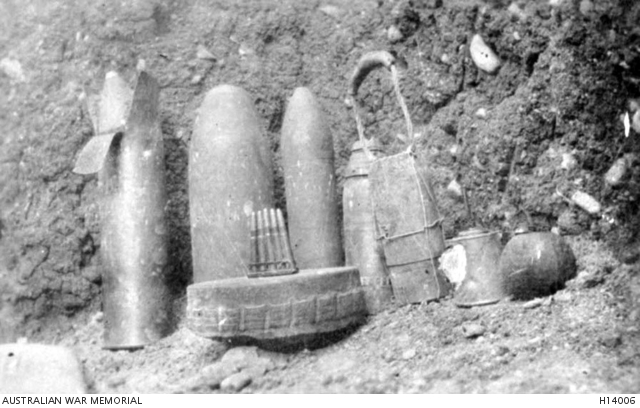 Some unexploded Turkish shells and other ammunition gathered by AIF soldiers - similar
to the personal collection being kept by Col. Rosenthal above.
[Courtesy of Australian War Memorial - H14006]