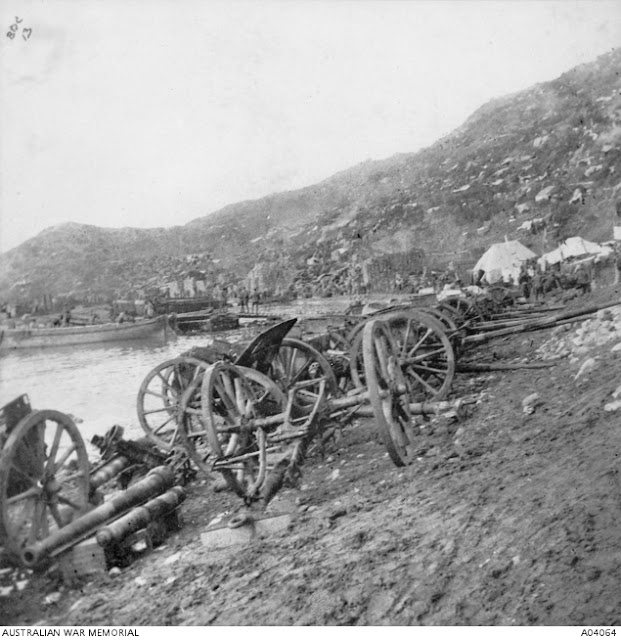 Damaged guns and limbers on the beach at Anzac Cove - the damaged components
of the 7th Battery's No. 2 Gun likely ended up on the same pile (below).
[Courtesy of Australian War Memorial - A04064]

Our little destroyer gave the Echelon and the Bastion trenches a shaking up early this morning.  Every night she gets in close to the ruins of Gaba Tepe and lets fly at the enemys positions.  Gr Alderson was killed this morning while banking up the earth to No. 4 gun parapet.  A canteen ship is in today and I have sent down some money to get milk etc.  We engaged target on Gun Ridge this evening and our friend from another direction engaged us and he put two shells into our gun.  We had just withdrawn when he put one right through the shield where I was laying from but fortunately he did very little damage to the sights, he tore a terrible hole in the shield.  As soon as he had knocked off, we put another shot at target (Plum Pudding Bush) just to show him we were still on the Peninsular.  This is the third time I have been on the gun when Abdul had got a direct hit onto us.

I woke up pretty early and found it very overcast and sprinkling rain. My poor old store covering was unable to keep out the slight downpour and I was very uncomfortable for a few hours. The rainwater used to collect on top in patches and the wind shifted the covering and in it would come in large splatches. Another of our Gunners “Darkie Alderson" was killed to-day working in No. 4 Gun Pit. He was a very dark swarthy complexion and that is how he gained his nickname. He was a good fellow in every way.

Had my usual trip to the beach stores in the evening. In the evening I also went down to Ordnance to see if Canteen Ship in and to obtain stores if possible. After taking party down I found we could only see a list of goods & prices and articles would be distributed to various Divisional Headquarters etc. It suddenly turned very cool to-night and it made it much more pleasant. I trust that we shall have a continuance of these conditions for a time.

Mr Forrest returned from sick leave. Gave me a good deal of information concerning Imbros and Hospitals at Mudros. Told me of the torpedoing of the "Royal Edward" carrying about 1000 details troops, only 300 of whom were saved. Another ship full of ammunition had passed the same point about 3 hours before (about 200 miles from LEMNOS. The Austrian Submarine was evidently waiting for the ammunition ship. Col Fischer’s Hospital at Mudros has been erected, but the ship with all his stores has gone astray and he has had to carry on with equipment kindly lent by the Navy. A large condensing plant has now been erected at Mudros. From Chaplains reports to hand I see Capt Johnstone has been invalided to Australia permanently incapacitated. He came ashore at the Dardenelles (not on duty) and was hit while on the beach. Lt Sandy also very low from blood poisoning. Capt Marks was at Malta and returned here today. He had great difficulty in securing his return. Gens Walker and Hobbs at No 1 gun 7th battery. Very gratified with work of 7th battery on Lone Pine and expressed the wish that N. Zealand 18pr Battery should do equally good work on their side. Watched 7th Battery shooting, enemy also dropping shells into Lone Pine position and 7th Battery. One man killed by fragments of HE at Battery. Have just heard that a trawler with some thousands of rounds Artillery ammunition sank off Suvla last night. From enemy’s captured 75m Gun position we learn that their emplacements are under growing trees with heavy timber overhead cover and 6 feet of earth. I understand medical services have been instructed to provide for a campaign here lasting until November. Sent in note for pay required by Brigade in the first week of September. Hear definitely that 200 mail bags went down about 10 days ago in a barge, 160 being Artillery mails. Our luck is out.

Born Oswald Percival Alderson in Grafton, New South Wales, Percy enlisted in Brisbane as a Gunner in the 3rd Field artillery Brigade Ammunition Column.  Travelling to Egypt on board the A22 Rangatira alongside the men of the 7th Battery, Gunner Alderson no doubt built a lasting camaraderie with his fellow artillerymen, before deployment to Gallipoli.  It's uncertain when Percy was promoted onto the 7th Battery's No. 4 Gun (his service dossier consistently refers to him as a member of the Ammunition Column, although his Army Form B. 2090A places him as 7th Battery).  On the 19th August, a well-placed Turkish  H.E. shell clipped the parapet & exploded as Percy was working to build up the earthworks of the gun pit - killed in front of the Gun's other detachments, Percy was laid to the rest the same day in Shell Green Cemetery.

The below was published in Grafton's Daily Examiner on the 18th September 1915:

"News was received in town yesterday of the death in action of Gunner Percy Alderson, who had been in the Dardanelles since April 25. The deceased soldier, who was 35 years of age and unmarried, was a son of the late Mr. W. H. and Mrs. E. C. Alderson, and was a native of Grafton. He was educated at the public school, after leaving which he served for a time in the local Telegraph Office. He had made several long tours, and there was scarcely a port in Europe and America, with which the late Gunner was not familiar. He last visited Grafton in July, 1914, enlisting in Brisbane with the first Queensland contingent. Mesdames Ainsforth (South Grafton), F. T. Doberer (Grafton) and Ainslie Lindeman (Upper Clarence) are sisters of the late soldier, whose brother (Mr. Norman Alderson) resides in Sydney. A service card received by Mr. Harold Hynes, dated from Egypt, August 7, from the deceased, reported "all well," a recent letter conveying a similar message, and stating among other things: "We expect to leave here (the Pyramids) in a hurry, and am just sending you a line. We expect 'it' any day now. Do not know where we are going to." The address given in the note was "1st Australian Expeditionary Force, 7th Field Artillery, England."