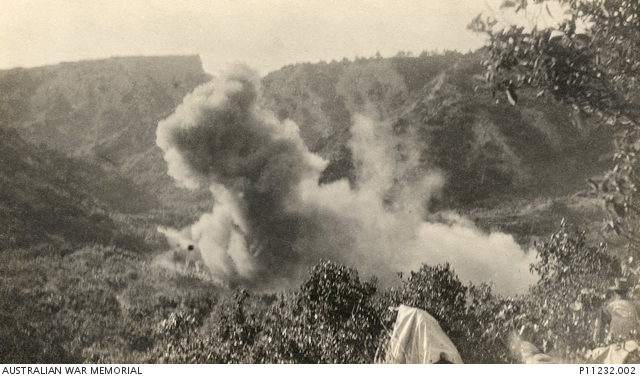 Original inscription reads "A reminder from the 'Goeben'. 11in shell bursting" - one
of a collection of photographs thought to be taken by 440 Trooper Arthur Lovett, 3rd
Light Horse Regiment.  Billy mentions the same in his diary entry below.
[Courtesy of Australian War Memorial - P11232.002]

Big shells have been coming over all last night and this morning, reported to be coming from the Goebon. Our Navy are bombarding the enemys positions all this morning.  Two of our submarines have gone up the straits and have sunk the Goebon, a gunboat and a Turkish transport.  Afterwards it bombarded Maidos.  This evening artillary duels are in full swing.  We are engaging Turkish positions and supports.  No.  4 gun has been put out of action but has been replaced by No. 1 gun has been doing splendid work.  Our gun has been doing good work.  We are assisting the Infintry.  The enemy have concealed guns with which they are hitting it into us hot and sudden.  Fierce fighting is still ragin.  Our troops are advancing towards Maidos.  The 7th Battery have been mentioned in orders for their splendid work.  This evening we engaged a battery of guns on Gun Ridge. 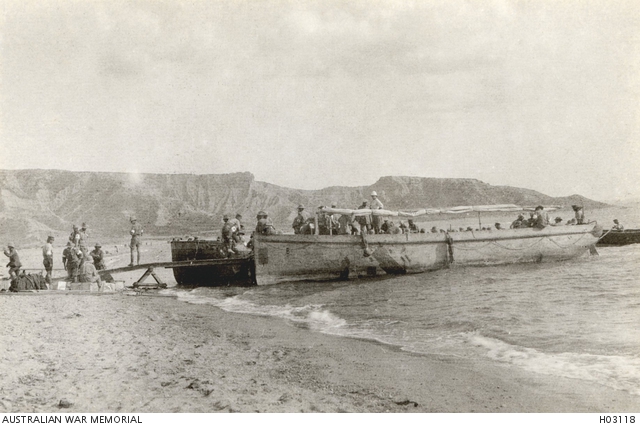 Wounded Australian soldiers being loaded on to life boats, to be taken to a hospital ship
off shore following their unit's counter attack at Lone Pine on the 8th August 1915.
[Courtesy of Australian War Memorial - H03118]

I was up early and it was fairly cool but bracing. There was still plenty of munitions flying about – in the air of course.

It was a perfect pandemonium Cracking and barging on all sides. At about 10 am the Turks put one of our guns out of action and our mechanics immediately set to work to have it fixed up. Their shell hit the gun well on the buffer which contains the springs. The enemy gave us a good deal of what our chaps call hurry up stuff in artillery vernacular. In my store apology a large piece of shell fell and hit the top of a case piercing it right through to the biscuits inside.

One of our guns is to be shifted and placed in a new position and this necessitated a lot of work to some of our chaps to-day. It is wonderful the perfect Sang Froid of our chaps as they go to and fro carrying ammunition and other articles regardless of the shells and missiles flying all around. Went down to our base store in the evening with my forage Party and finished up around 10 PM. Every night now I have to go round to our guns and give an issue of rum. It is a great stimulant now as things are at such a high pitch.

0906 No 4 Gun fired 5 rounds at observing party in same vicinity + was at the same time engaged by an enemy’s gun who damaged spring case + wheel putting gun temporarily out of action.

No 4 Gun under Lt Ross was under a heavy fire from enemy artillery + was well served.  No 1 Gun was withdrawn + replaced No 4 which was damaged. 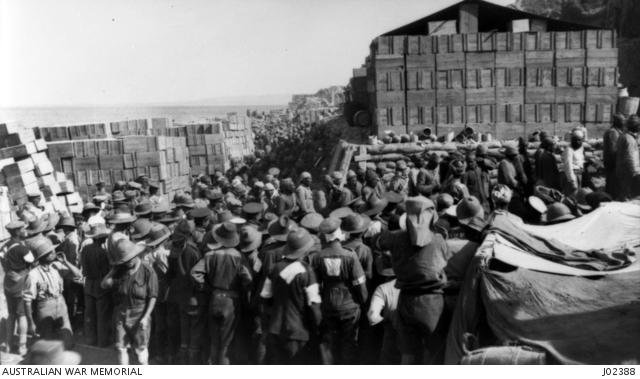 500 Turkish prisoners captured in the continued attack of the 8th August 1915, being
brought along the beach to Anzac, mentioned by Col. Rosenthal below.
[Courtesy of Australian War Memorial - J02388]

Very heavy bombardment by our guns this morning of position in front of Hill 971. Howitzer Shells were passing my HeadQrs like Express Trains, and the noise generally was terrific. At 4.15 AM our NZ & A division together with new troops attacked along line 161-971. The rifle and machine gun fire together with our guns and guns of the navy made the place an inferno. Our flank is the pivot so matters are comparatively quiet here. 7th Battery again doing good work against Turks in the open. 9th Battery engaged silencing Wine Glass and Olive Grove. Selected new site for No 1 Gun 7th Battery and got party to work on it. Informed Gen Hobbs accordingly. Major Anderson returned to duty today, just in time to join in the chorus. Enemy’s Artillery fire on this flank much reduced. Heard that 200 bags of Australian mails had gone down with a trawler. Also heard that we had captured 1500 Turks. Sad burial parties at work. Very many killed on both sides.

Got the No1 Gun 7th Battery into new position and reported to general Hobbs at 8AM that it was ready for action. Mr Forrest very ill. Had to be sent to Hospital Ship. 7th Battery put in a lot of shrapnel during the night. Our forces making good progress.