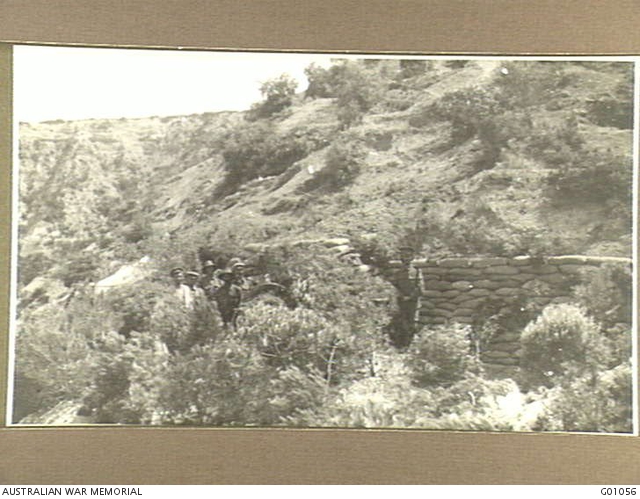 The 9th Battery's No. 2 Gun, which regularly fired on Olive Grove - Billy's No. 2
Gun of the 7th Battery took turns with the 9th Battery, in shelling the Turkish
trenches at Olive Grove & Gun Ridge on the 18th August 1915 (below).
[Courtesy of Australian War Memorial - G01056]

There has been a few shells flying round. Our No. 4 gun is putting in good work and is greatly annoying the Turks. I fired at a trench on Gun Ridge then took the angles and registered a new target on Gun Ridge where there is supposed to be a gun firing from.  There has been heavy fighting going on on our left flank.  There is a big bombardment going on at Achi  Baba.

It was a bit cooler this morning. Nothing Fresh.

With Major Martyn, Engineers, selecting positions from which to make outward gun roadway to Lone Pine for possible advance on South Eastern front for 8th and 9th Batteries. On my return to Headquarters I found a 5" shrapnel had burst on percussion at the entrance to my "dugout", and had smashed things up generally, though fortunately the burst had been outward from the entrance and not inward.

Arranged with Col Robertson for certain bays of support trench in front of No 1 gun 7th Battery to have parapet and parados lowered. Trench being filled in at 7th battery to give better protection to no 4 gun. Enemy’s artillery very quiet. 7th battery fired a few rounds at Lone Pine works, and 9th Battery against Olive Grove. Received interesting letter from Capt Jopp, telling me of four encounters he has had with the enemy’s Taubes.

Headquarters of our Aerodrome now at Imbros. 6th Battery second Brigade arriving tonight, and New Zealand battery from Cape Helles arrived during the day. Our troops on left flank doing well but cannot get much information about the British troops cooperating.