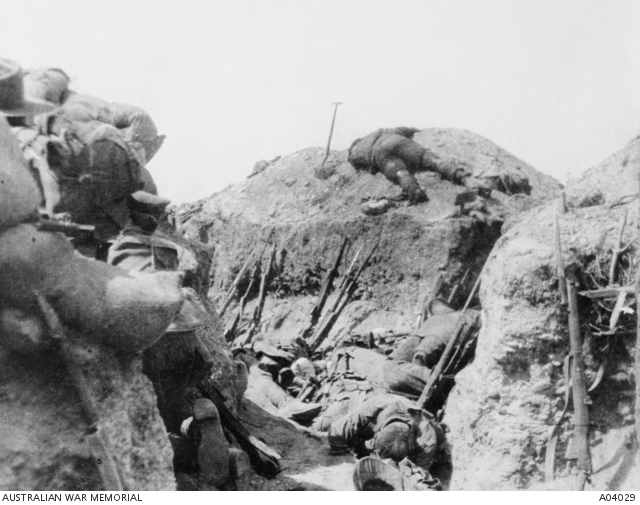 The bodies of Australian soldiers in and above Southern Trench at Lone Pine on the 8th
August 1915 - rifles with bayonets attached are leaning against the parapet, and two
survivors of the battle are pressed closely into the left hand wall.
[Courtesy of Australian War Memorial - A04029]

We were working hard up till midnight last night reconstructing our parapet which has been chewed away by the enemys high explosives.  I had about 2½ hours sleep and then first thing we were up and blazing away at the Turkish troops and the enemy were making it very hot for us, putting his explosive shells into us, they blew our parapet to pieces, one high explosive struck about a yard from me in the wall of the parapet.  I was on the gun seat at the time and was covered with sandbags and dirt etc.  We had to just go on supporting our Infintry and take the chances of being knocked.  B. Banes of No. 4 gun was killed yesterday by a shell and Lieut. Ross was wounded.  We have had a very trying day and I feel dirty ragged, half smothered, near blind, tired, half deaf, thirsty, hungry and very far from home.  There was five guns concentrating their fire on us this morning while we were checking the enemy supports.  There is a fierce battle raging on the left flank.  At Quinns Poast last night the Turks counter attacked about 20,000 strong each of them carrying three or four bombs and they succeeded in driving our men out of the trenches we had captured from them there and the 1st, 2nd and 3rd Light Horse were pretty well cut up.  The trenches are just one heap of human flesh mangled up by bombs.  The Irish Fusilears retook the trenches from the Turks and are still in our hands.  The Turks it is stated must have lost 15,000 men in this attack.  The dead are pretty high smelling.

The Battle is raging at higher force than ever and the enemy is certainly fighting very stubborn. This morning they sent shells all around our store quarters while our guns kept them very busy indeed. Just at daybreak as I got up our Battleships were also pouring forth a tremendous fusilade. At one of our guns this morning we had the misfortune to lose a fine young fellow in Bombardier Ted Baynes while Lieut Ross was wounded slightly. The Turks gave us a good deal of shelling – it was unceasing all day till sundown. As I went along the beach in the afternoon the casualty sheds were full telling their own mournful tale. I had occasion also to do my usual evening trip that way for stores. As you can understand store journeys are very tedious specially the ascent of the steep grade of ridges going back to the firing line. Late in the evening Bomb Ted Baynes was laid away.

0650 5 enemy guns concentrated on to our guns + subjected us to a lot of fire.  No 2  Gun embrasure was blown in + was repaired with difficulty.

0845 No 3 was temporarily withdrawn No 4 Gun which was halted most suffered much damage to parapets.  Lt Ross in charge was wounded in head + 2282 Bom L Baynes was killed.

0800/0845 No 4 Gun fired 50 rounds including 6 HE at enemy trenches + live targets on SE Slopes of LONE PINE.  Turks were caught in communicating trenches + subjected to accurate fire.

0915 No 1 Gun received direct hit on shield but gun uninjured.

Worked up till 2 AM this morning with detachment for No 1 gun, 7th Battery. We got the new emplacement bagged up on the exposed side; the balance of the work being carried out today by gun detachment. B.A.C. party making the approaches and communication trenches. Hope to do good work with this gun. Extra men reported from Alexandria for this Brigade. Very glad to see a/Br Mitchell, our Brigade Clerk. In Mr Forrest’s absence he will be a very great help. Could not write a decent letter home this week. Work here much too strenuous to admit of any time for oneself.

I have had 3 hours sleep in the last 3 nights. Terrific volume of shell over us since early morning. Before lunch the 7th Battery had over 600 shell landed into its position smashing down gun emplacements. Strange to say our only casualties were 1 man killed, 1 man wounded and Lt Ross wounded. His work has been most meritorious throughout and I am putting in a special report and recommending him for the Military Cross.

The work done by the 7th Battery during the last 36 hours has been absolutely splendid. Enemy’s attack on Lone Pine this morning very vigorous. We estimate the 7th Battery accounted for over 500 Turks.

My forward officer in new trenches (Mr Turner) is doing good work. Quiet afternoon. Work on new gun emplacement continued and roadway being improved. Inspected 7th Battery during evening. Found parapet and gun emplacements demolished, 5 enemy’s guns having concentrated on them during the day. They were all rebuilt during the night. Worked at new gun emplacement till midnight. Received two letters from Nell dated 28th and 29th June: also one from Father and two from A.King.

Born in Middlesex, England, in 1881, Edgar Baynes was an artillery veteran.  Having served with the Honourable Artillery Company, B Battery, Imperial Yeomanry, Edgar served for a year and a half in South Africa during the Boer War.  Immigrating to Australia shortly after discharge, he took up residence in Pittsworth on the Darling Downs, establishing a motor car garage as mechanic.  Travelling to Egypt & the Gallipoli on board the A22 Rangatira as Gunner with the 3rd Field Artillery brigade Ammunition Column, Edgar was promoted to Bombadier with the 7th Battery only 2 weeks prior to his death.  Despite all records in his Service Dossier (including those available through the Australian War Memorial) stating his date of death as the 10th August 1915, Edgar lost his life on the 9th August, as corroborated by the above diary entries.  Bombardier Baynes was buried in Shell Green Cemetery on the afternoon of his death, & like Battery Sergeant Major Handford 3 days previously, was presided over by Chaplain S. E. Maxted, who had originally attempted to enlist as a Chaplain, but was denied & in turn re-enlisted as a stretcher-bearer with the 1st Field Ambulance.