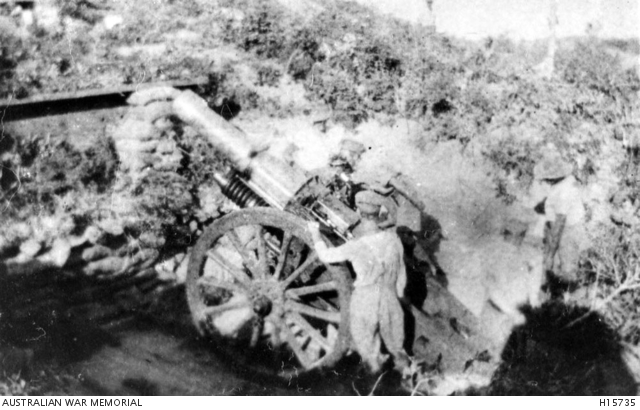 An AIF 6 inch howitzer known as The Kangar, located in White's Valley, preparing
to fire on the Turkish Army gun known as "Beachy Bill."
[Courtesy of Australian War Memorial - H15735]

There has been a heavy bombardment going on all night at Achi Baba. Things here have been fairly quiet during the night.  This morning there was a fairly hot artillery duel between the 7th, 9th and howitzer batteries and the enemys batteries.  I think both sides got tired of it. 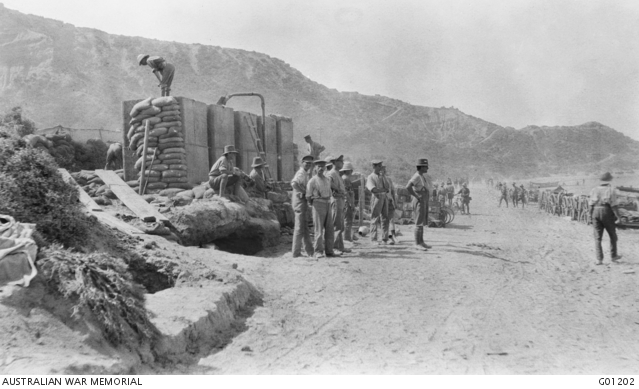 The chief depot at Anzac in August 1915, which was situated on North
Beach - Bombardier Sparkes (below) paid a visit as part of his
responsibilites as Quartermaster Sergeant.
[Courtesy of Australian War Memorial - G01202]

Water has been a rather troublesome matter to deal with recently. With the new movements there has been a big drain on resources and our men have had to be content with about half rations. It is a bad time to stand it now with the weather oppressive. Bread and fresh meat is also off issue just now also any fresh vegetables. Received parcel from Capt Jack Fitzgerald with a writing pad envels & chocolates etc sent by him from Alexandria. It was welcome, I can assure you. While along at Ordnance I met Major Griffith. It is a very tiresome walk there in the heat along the sand and back up the precipitous ridges. It was a charming sunset this afternoon. His Majesty went down a perfect globe of gold and it was delightful to see him dipping his head behind the Island near Embros. For some minutes he was peeping over the side of the island but he was soon lost to sight leaving a crimson glow reflecting over a diaphanous sky. The cruisers just below us were still sending their messages of death ashore somewhat breaking the otherwise tranquil scene for one could only hear an occasional crack of a bullet just at the same time. The boom of the guns dispelled any idea of Peace. Sergt Stewart returned from Lemnos yesterday after his illness.

1110 12 [rounds fired at] trenches S.E. Slopes of [LONE PINE] in reply to a 75 gun of Turks which was shelling our trenches.  This drew the fire onto Battery position 52 rounds being fired but without any casualties. 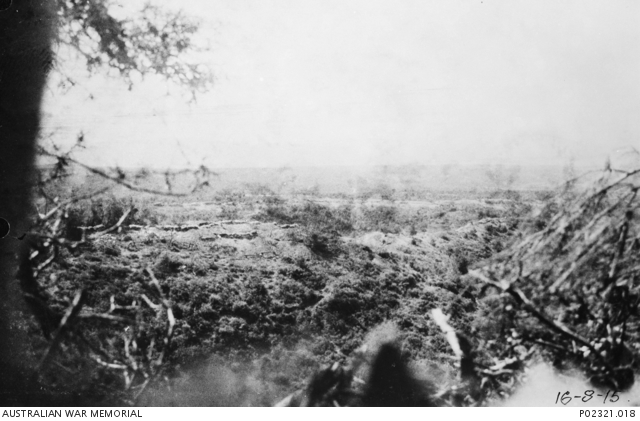 Looking through a loophole on the southern end of Silt Spur on the 16th August 1915,
towards Snipers' Ridge and Pine Ridge, with Gun Ridge in the distance - these 3 Turkish
positions were fired on by the 7th Battery on the same day (above).
[Courtesy of Australian War Memorial - P02321.018]

Spent the morning in reconnoitring Lone Pine position. Great possibilities for bringing 18pr guns into suitable positions for an advance. Mentioned the matter to General Hobbs on the phone. We will inspect tomorrow again. He called at my Headquarters while I was absent. Wrote to Major Warren NSW asking him to send my two Ericsson telephones and two helmet cases. Our horses moved more 18pr guns to Left flank for New Zealanders during evening. Major Browne building new gun emplacements near Major Burgess’ Headquarters. Olive Grove and Wine Glass very active yesterday. The latter shelled our Lone Pine position and we could not locate guns. Consequently we opened with 7th Battery on their trenches. This very soon had the effect of forcing the enemy to switch on to our guns. He fired 52 rounds in 30 minutes but did no damage. Brigade telephone lines nearly finished, all on permanent poles and all air live. A most efficient service.

Last night very quiet. All along the line preparing for another big move. Brother Turk is not getting much rest or peace. Sunset tonight absolutely marvellous. The shipping at Suvla Bay has now assumed big proportions and the Bay is boomed against submarines. Then there are numbers of destroyers, 3 Monitors, trawlers, 5 Hospital ships and plenty of small launches.