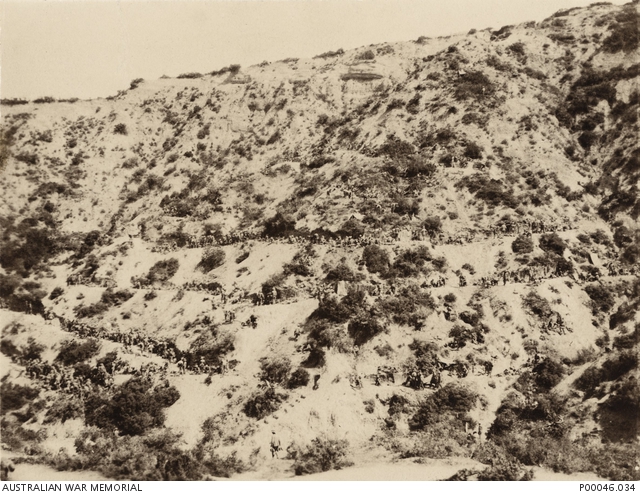 Lines of reinforcements wind their way around the side of the hill during the continued
attack on Lone Pine, 7th August 1915.
[Courtesy of Australian War Memorial - P00046.034]

Well very little sleep could be got last night I was up till 2 oclock this morning then got up again at 5.30.  At about [illegible] this morning a landing party consisting of [illegible] troops landed at a point on our left known as Neba Nesse.  At about the same time another party landed further north but met with no opposition.  Well at Neba Nesse our troops met with strong opposition, they are fighting fiercely now, the enemy are bursting shrapnell over our troops on the beach.  There are about four cruisers down there and they are pumping shells into the Turks emplacements, the cruisers have quietened some of the enemys guns.  Our troops are fighting their way on towards the hills.  Fierce fighting has continued through the night and is now going still fiercer.  Our B. troops have got several battries ashore and fighting is at its damdest.  We are engaging the enemys trenches, machine gun emplacements and their communication trenches. This evening we were engaging the Turks communications trenches and the enemy put a shell into the entrance of our parapet and wounded Cpl Hanks. They put several more into our parapet.  We were very lucky that more of us didnt get hit.  Latest up till 2 pm this evening, we have captured 500 Turks, roughly speaking, and our casualties up to that time amount to about 1,300.  The Gurkers have done good fighting and on our left we have got the Turks on the move.  The Navy are shelling the enemy all day long.  Our field and howitzer battries are constantly engaging the enemy.  All last night and today the enemy have been sending shells from either their forts or their gunboats in the straits.  They are enormous shells but do very little damage considering.  This morning our plane chased a German Taube and the Taube made down for the Turks lines thinking our chap would follow and the Turks would then bring him down but our chap knew too much for him and let him go.  Latest reports say that the advance has gone beyond all expectations.  The fighting is still raging.  Cpl Hanks who is in charge of our gun (No 2) was wounded by shrapnel this evening. 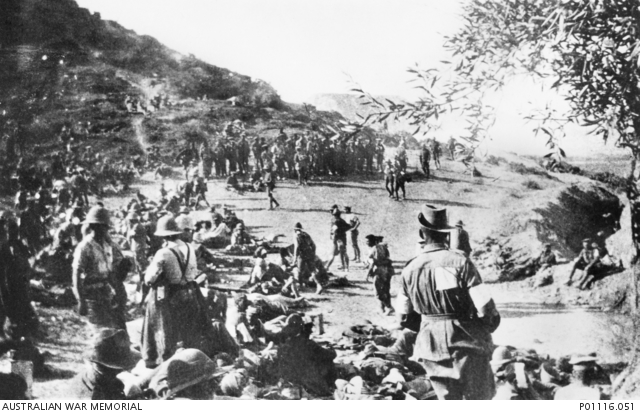 Number 2 Outpost, south of the mouth of Chailak Dere, where the 4th Field Ambulance
are amongst those tending wounded soldiers arriving at the foothills, 7th August 1915.
[Courtesy of Australian War Memorial - P01116.051]

The battle still continues in full force. It is a delightful day in every way as far as weather is concerned. On every side shot and shell are flying in thick profusion. We had another sad duty to perform to-day and that was to bury our sergeant major who was killed while on duty last night. The news today told that our infantry were advancing to take Hill 961. The casualties on our side are expected to be very and from an account I heard up to 2PM there were quite 2000 killed and wounded. Of course it is almost impossible to estimate the enemy’s losses but we are told that they are terribly heavy. As we attacked we suffered the disadvantage naturally. To-day owing to the death of our Sergt Major one of the sergeants was appointed temporarily to the vacancy and as he was himself holding the Quarter Sergeant’s position our Captain asked me to take over these duties temporarily. I consented to do so and I am now the 7th Battery’s Quarter master’s Sergeant and have many duties to carry out including the victualling and clothing of all our men here. It calls for a good deal of risk in going about in the open – even more apparent than doing duty on the gun.

In the evening I went along to Headquarters and secured what goods I could and of course all Q-M’s as we are generally called tell fibs to get extras for their units and I made my initial bow as one of these special kind of animals. On the way back on the beach I had a dip in the briny and it was rather lonesome as I was entirely on my own having sent my forage party on to the stores near our Battery.

My quarters are in the store which hardly deserves that name except for the reason that it is a heap of boxes covered over with a blanket here or a piece of bag there and old rubber sheets in other parts. I did not fully enjoy my sleep as the Howitzers near my camp kept up an incessant fire all the night and the roar invariably woke me before I fell soundly asleep. 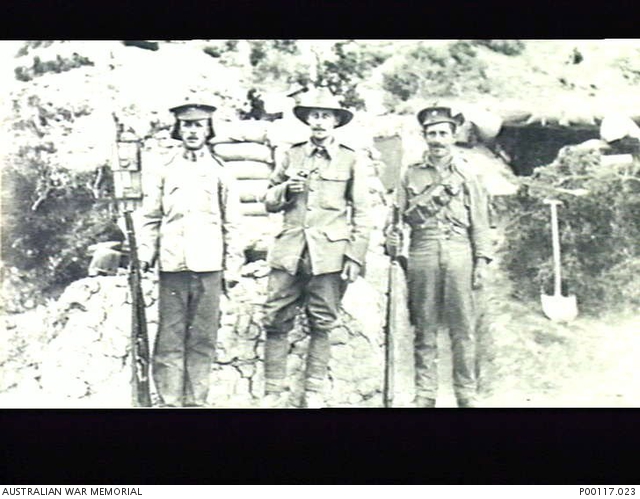 "This is a snap of our honourable Quartermaster Sergeant Novak Leopold Augstein in the
centre of two Drivers, cooking for the Battery, standing in front of the cookhouse which is
built of sandbags to prevent strays.  Note some of the dug-outs with the waterproofs over
them on the hillside" - Q.M.S. Augstein was temporarily promoted to Battery Sergeant
(above), with Bombardier Sparkes stepping into the roll of Quartermaster Sergeant.
[Courtesy of Australian War Memorial - P00117.023]

No 4 Gun swept Legge Valley with heavy fire where the Turks were reported as massing with good effect.  During afternoon a gun opened fire from GUN RIDGE Square 68 N 6 which No 2 Gun engaged at 1550x fuze 5.  8 rounds were fired after which the enemy did not reply.  During the day No 2 Gun also engaged PINE RIDGE Bastion + destroyed overhead cover + earth works.

No 3 Gun was employed on earth works South of PINE Ridge + searching the Valley east of same.

No 4 Gun had some good live targets in communication trench 68 C 3-6-9 at range of 850x + it was visible that great execution was done.

During the day the embrasures of Nos 2, 3, + 4 Guns was blown away + had to be repaired.  Board gun platforms were put in as ground had been very much broken up.  The service of guns by the gunners under heavy fire was excellent.  340 rounds of which 40 were HE were expended. 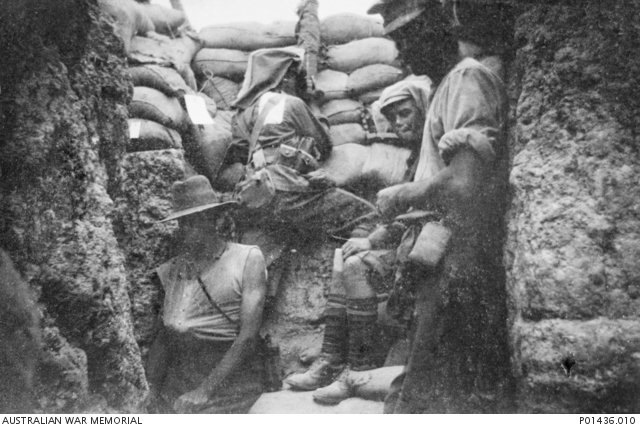 An Observation Team using a periscope at the southern end of Leane's Trench.  These men
from the 12th Battalion are possibly observing the attack on Lone Pine.  The two man team
are in full battle dress, complete with full webbing, a camouflaged periscope, & camouflaged headdress while the soldier looking through the periscope has a white patch sewn on the back
of his jacket - 7th August 1915.
[Courtesy of Australian War Memorial - P01436.010]

Heavy shelling by Navy and our guns during night. I have not yet heard if our operations were successful against German Officers Trench, but on Lone Pine our position is good. At daybreak Suvla Bay and vicinity presented a fine sight, innumerable craft of all kinds moving about, Men o War, Transports, trawlers etc carrying out landing of troops. The Turks must have received a terrible surprise when day dawned. It reminded me of our first day at Gallipoli. The casualties in this show must of necessity be very great. Heard that Turks had reinforced the Right Flank by about 1500 men towards dusk last night. We shall have to keep a sharp look out against Counter attack. A pretty incident at 6AM.

A German Aeroplane flew overhead, and presently one of our biplanes gave chase, manoeuvring for position. The Taube had the better speed and was able to get away. He certainly wasted no time about his departure. The Captive balloon is up watching and reporting effect of Navy shooting. At 6.30AM seven hospital ships were lying off Anzac and Suvla.

A shell landed 2 yards in front of my dugout doorway during the night but luckily did no damage. Lent Sergt and 20 men to Col Shepherd Lowland Brigade at 6.30 AM for transport of Ammunition.

Our troops now entrenched in Lone Pine. 7th and 9th Batteries did excellent work, the former against Infantry targets and the latter doing Counter Battery work. Very interesting to watch landing and movement of Troops at Suvla. An absolute picnic as compared to our first landing. They are pushing well forward, also New Zealand and Australian Division; and we hope soon to have Hill 971. An enemy battery got on to No 4 gun 7th Battery about 7.30 PM and put in 15 H.E. shell. Parapets were smashed to pieces, but neither personnel nor gun suffered damage. This gun kept up fire all night against Snipers Ridge, Weir Ridge and Wanliss Valley. Made a reconnaissance during the evening with the object of selecting new position near Chatham Post for No1 gun 7th Battery. No Success. Will try again during the morning. General MacLagan and General Ryrie expressed admiration of the work done by 7th and 9th batteries. Lieut Evans slightly wounded. I understand two Divisions landed at Suvla.