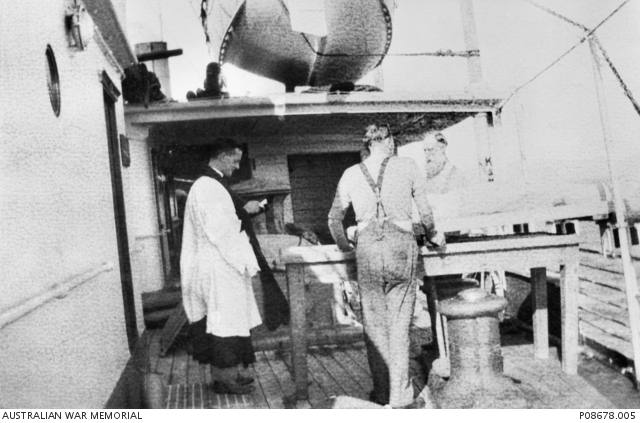 An army chaplain offers last rights before the body of a dead soldier, most likely
wounded at Gallipoli, is buried at sea.
[Courtesy of Australian War Memorial - P08678.005]

[Author's Note] Despite the best of efforts afforded by the medical staff on board the Arcadian, Billy lapsed into unconsciousness in the early hours of the 25th August - due to his injuries sustained on the 21st of August, & heavily medicated on continual morphia injections, Billy slipped away before the Hospital Ship could make port at Alexandria.  As was the standard practice, Billy was buried at sea off the coast of the Greek island of Andros, presided over by Reverend M. Evans.  Billy's "Roll of Honour" is listed below.

The other day I met Wilson brother of Jack Wilson who is with our 5th Light Horse. He is acting in Col Hubert Harris position since he was killed. It is very sultry to-day and looks like a storm. Yesterday it also blew up like a storm and we had a sprinkle of rain only. If we get anything like a rainy season here we shall really be in for a bad time. It is quiet today except for Beachy Bills sending a shell over occasionally & a rifle Bullet cracking here & there. Lower down where the new Division landed the Cruisers are sending a few broadsides ashore. The outlook on to the water looks very dull owing to the threatening state of the weather. Sergeant Turton went away today.

Lieut Hare left for Helles. In bed all day, very ill. General Birdwood and Hobbs called to see me during day and insisted on my going to Hospital Ship. Removed to clearing Hospital at 5 PM. Had to wait till 9PM to get on to Barge, reached ship about 9.30. Put to bed and fell into a semi conscious condition. Hospital Ship was the "Formosa" and Gen Hobbs also travelled by her to Alexandria, he having been taken ill the day after me, and reached the ship before she cleared Gallipoli. I remember him speaking once to me otherwise my mind is a blank. On reaching Alexandria I was removed to a Military Hospital practically in the town, the name or number of which I cannot remember, and after 24 hours there I was taken by Motor Ambulance to No 17 General Hospital at Victoria, a suburb some miles out of Alexandria. Again relapsed into unconsciousness and remember nothing for some days. The doctors informed me that for some four days they Despaired of pulling me through, but eventually I "turned the corner", due they think primarily to my having been inoculated previously. 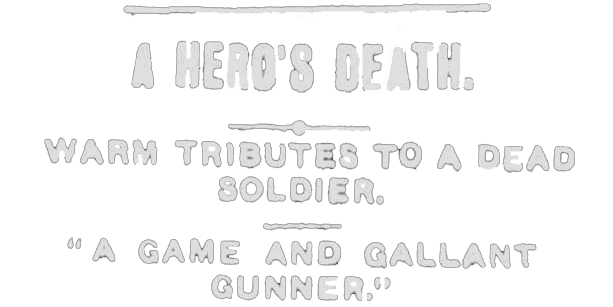 Mrs. James Pacey, Kenmore, via Indooroopilly, has received the following letter regarding the death of her son, Gunner W. L. Pacey, of the 7th Battery, from Nurse Ida L. Burkett :- "The night before your son passed away, he asked me to write to you. I should have done so earlier, but contracted enteric myself, so was unable to. He was very badly wounded, being hit in the shoulder and abdomen. His case was quite hopeless from the time we took him on board the hospital ship at Suvla Bay, off the Gallipoli Peninsula. I know you will be glad to hear he bore his sufferings with the greatest courage possible, and through it all showed wonderful unselfishness and gentleness to those around him. I never heard him complain once, and we did all we could to ease his pain by continual injections of morphia. Poor boy, that was the only thing he did not seem to like; he used to smile and say he was afraid he was getting to like it. I do not think he realised how near the end was, and during his last few hours of consciousness he told me how beautiful Australia was, and was making plans for the future. He was looking forward to his 21st birthday cake you were sending him, and very much to seeing England - we were on our way there. Then he asked me to write you, giving your address, and tell you how much more comfortable he was than when he was first wounded. A few minutes later he became unconscious, and never spoke again, dying early in the morning. He was buried in the Mediterranean Sea, between Sicily and Malta. Words of sympathy would be superfluous on my part. I may say he was the bravest and kindest man I have ever met, even amongst our many very brave - and his mother must be proud of him to the end of her days, for she was the last one his thoughts turned to at the close of his all too short life. I should like to know if you receive this letter, then I shall know his last message has been received."

The deceased soldier's sister has received the following letter from Major Hughes:-

Unfortunately I have to confirm the sad news of your brother's death - Gunner W. L. Pacey, 7th Battery, F.A. - conveyed to you by Major Darcy. On August 21 he was serving his gun with the detachments, when an enemy shell burst over the gunpit, and wounded him and some others. He was at once attended to by the medical officer, who found him to have been wounded in thigh, hip and abdomen. He was conveyed by stretcher to the beach, thence to the hospital ship, where, notwithstanding medical attention, he died at sea on August 25. I have no information on the point, but I presume that in accordance with the usual practice the burial took place at sea. I was not with the battery myself at the time, being myself in hospital. I wish to add my sincere sympathy, and also that of your brother's comrades in the battery goes out to you and the members of your family in your sad loss. It may afford you some slight satisfaction to know that, as his commanding officer, I have every reason to be satisfied with his services as a gunner in the battery. His conduct had always been most exemplary, and his services on the gun had been courageous and efficient. When the battery first came into action your brother was in the detachments of the gun which I personally commanded, and in that first strenuous week officers and men were drawn closer together than under ordinary circumstances. Living, eating, fighting, and sleeping (when we did sleep) in the one gunpit developed a close comradeship amongst us all. You will, then, believe me, when I tell you that I deplore deeply your brother's death, and can only tender you my sincere condolence, and assure you that your brother died as become a game and gallant gunner - and an Australian.

The below was the last entry in Billy's diary, written by a fellow member of the 7th Battery:

It is with much regret that I herewith write a few lines in respect to dear Will who has departed from us.  This book was found along with some clothing, and was kept aside to be sent to you but owing to a new man going into the office it was forgotton.  I soldiered with Will when in the Citizen Forces in Brisbane and found him a most geniel companion.  It pleased me to see at Enoggera Camp when I enlisted for he and I were always chums in the Battery. We both went over  to  the Peninsula on the 25th April 1915 and I might say that Will took things calm and collected as though he was just doing duty on the parade ground.  All through the campaign he showed nerve and ability.  He always looked on the bright side of things and never complained. When ever the gun was in action he would be there and just prior to his death we had a week of very heavy firing and on the 20th Aug.  1 detachment of four men were severely wounded by a shell entering the gun pit.  The gun ceased fire until next  day  but  the Turks still fired  on  the position.  During  the next  day Will was told  that he would be the layer on the gun where the detachment were wiped  out.  It pleased  him  greatly to know  that he was  to fire the gun even though the Turks could find the position.  You will see by this   that he was devoted  to duty  and  nothing  would  please  me  better  than  to die a noble  death  as he. I'm sure any mother could be proud of such a brave son. When taken to the dressing station he was unconscious but Iwent down later on he waved his hand to me so Itook word back to the boys that Ithought Will would  pull through  but God had willed  otherwise and we got word that he died of wounds on the 25th Aug. 1915 on the Hosp. Ship Arcadia at sea. My deepest sympathy goes to the whole of the   family.
I remain

Trooper Thos. Currie, 5th L.H., writes to his sister:- "I am still doing well. I have received your last letter, dated October 12, also several cards and letters from all at home. I did not know of Willie Pacey's death until I received ---'s letter. I have since read the account of it in the papers. I knew he was badly wounded, as I was told all about it by some of his mates. I don't suppose Jim will be coming back now. He must have had a very bad time with his leg. Bill Pacey was a good lad, and he was well liked by all his crew. It broke them up when he got hit. I got a shock myself when I went up to see him. It was then that I learnt he was wounded. A shell burst right on the parapet in front of his gun. I miss Bill very much, as we often used to chat together. He used to come over often to see me when he had the time, and I used to do the same at every opportunity. Will you kindly convey my deepest sympathy to Mr and Mrs Pacey and family in their sad bereavement? Remember me to all old friends."

[Author's Note] The above was published in The Brisbane Courier, on the 25th February, 1916.  Tom Currie was a close family friend of the Pacey's - on his return from WWI, he returned to Pullenvale (near Kenmore), where he continued his relationship with the family.  In 1967, when Gallipoli Medallions were made available to soldiers who had served on the Gallipoli Peninsula, or in direct support of operations, Tom Currie co-signed the application form for Billy's medallion alongside his sister Dorothy (my Grandmother).