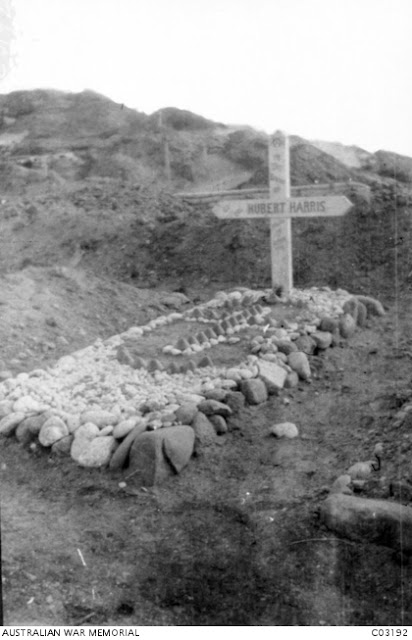 There has been a big bombardment going on at Achi Baba which still continues, you can see the big sheels bursting up the enemys trenches. A cruiser came down from C. Helles and bombarded the enemys emplacements right of our line.  Gun 4.7 also did some good shooting at some houses which the Turks use as their Headquarters.  This evening a German biplane flew over and dropped several bombs, one landed close to our hospital ship and he dropped another when he was over our battery. I saw the bomb leave his plane and then it came down with a rushing noise and landed about fifty yards from our gun, he then went away.

It was fairly warm today but quiet. Col Hubert Harris who was killed on the evening of the attack on the Turkish position was buried last night. Col Harris who was attached to the 5th Light Horse was well known in Brisbane. The Turkish aeroplane circled above our trenches to-day and there was a rush for cover when several bombs were dropped. Luckily they did no damage.

Enemy did not counter attack during night as expected. Very quiet. Visited Divisional Headquarters during morning, discussing mails and men’s rations. Had Gen Walker’s periscope repaired by W.O. Stamps. Heard from Major Griffiths that possibly Col Christian would get Artillery of New Division. Artillery will not be pleased if such is the case. Shell burst on 5" How. Battery today, killing one man and wounding another. Their first casualties. Hostile Aeroplane overhead during afternoon. Major Burgess fired 6 rounds two getting very close. I think we shall be able to keep the enemy off this position. Wish we had a couple of anti aircraft guns. Our first actual issue of H.E. Shell made today. 150 rounds per battery being supplied. Plentiful supply of ammunition generally coming forward now. All guns being again manned tonight in case enemy should counter attack on trenches captured by us. Enemy dropping some big high explosive shell in Victoria Gully, evidently searching for Howitzers. So far they have done no damage, and from our point of view we shall be pleased to see them put plenty of shell in the same place. Capt Bean obtained Artillery information from me concerning Saturday night’s operation.