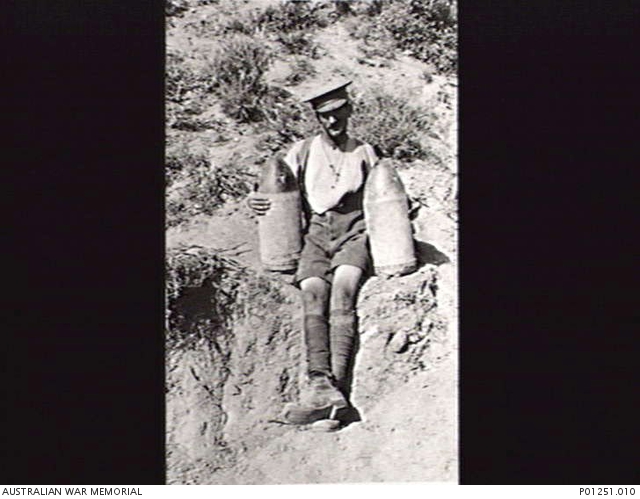 Private Donald of the 10th Infantry Battalion, who were stationed just to the left of the
7th Battery's position in the firing line, sits supporting two 8 inch lead-coated Howitzer
shells in August 1915 - these are likely from the same 8 inch Howitzer batch as those
mentioned by Billy below.
[Courtesy of Australian War Memorial - P01251.010]

Our howitzers started firing early this morning.  The enemy are firing an 8 in. howitzer at us and it kicks up a terrific explosion.  There was much rifle and machine gun fire on the left flank.  Last night the Turks made a few faint bomb attacks, otherwise nothing doing much.  There was five of our planes up this evening.  It is reported that the Turks have got.  A Turk prisoner was court martialed and shot for sniping our Red Cross men.

I was feeling bad again to-day I was not too well yesterday. Last night it was very oppressive and added to this was the odour of the dead blowing over from the trenches on our front. Heaps of dead men are visible all over the Country Side to the left of our position. I felt very weak coming to and from the stores back to our line.

1455 Enemy with fixed bayonets were observed in trenches at LONE PINE.  5 HE were fired destroying parapets + the returning Turks shelled with 8 rounds shrapnel.

1630 5 rounds were fired at emplacement East of Snipers Ridge effect doubtful.  No 4 fired 2 rounds at earthworks SE of LONE PINE.

Spent the morning thoroughly reconnoitring our new position on Lone Pine. Gained much valuable information concerning country north and south. Instructed Major Burgess and Capt Waite to make a similar inspection during the day. General Hobbs himself has not been through the position. Stench from dead bodies still dreadful though conditions are much improved. Enemy shelled the position very freely during the afternoon. S.M. Scarrot commenced duties as R.S.M. Gen Hobbs visited 7th Battery with me. During the afternoon a message came through that enemy was massing for attack on Lone Pine. Capt Waite located a number in trenches with fixed bayonets, put in a few H.E. shell and then followed them up with shrapnel. The 7th battery guns are splendidly placed for dealing with Lone Pine hill. The General of the 1st Aus Div sent to Capt Waite through General Hobbs a special message of thanks. This afternoon a flotilla of 5 planes came overhead making a very pretty sight.

During evening No 1 6" How was moved to a new position off Artillery Road near BROWN’S DIP. General Walker very anxious about Lone Pine. He anticipates an attack during the night. All our guns ready. About 8.30 a heavy rifle fire opened, but only lasted a few minutes. I think the Turks imagined we were about to attack them.