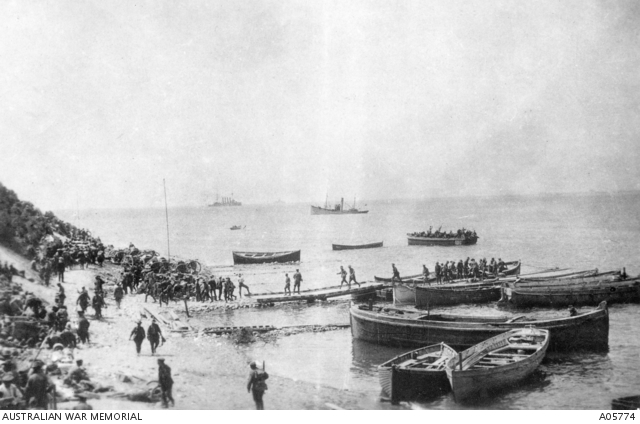 Reinforcements arriving on the beach at Anzac, August 1915.
[Courtesy of Australian War Memorial - A05774]


A German Taube came over this morning and dropped several bombs. The howitzers of  ours were dropping liddite shells into the enemys trenches about 30 yards in front of our advanced trenches. A German biplane came over this evening and made for Cape Helles. Our aeroplane came over and did some spotting for our howitzers. Last night the destroyers on our flanks were bombarding the enemys emplacements. A monitor early this morning came in close and bombarded Gun Ridge.

Went for fresh water at Headquarters today. Had a delightful swim. In the evening there was a small demonstration by our Infantry. A few mines were fired and the idea was to attract the attention of the enemy while some other troops were landed here, included Gurkas British Tommies and about 1000 more Australians. Just now there is a persistent rumour that we are to be relived especially those who have been in the firing line during the past 3 months. You can quite understand the strain is telling and our ranks have been greatly depleted owing to sickness and casualties.

No rounds were fired during these 3 days.

Getting phone lines laid out to new D.A. Station. Olive Grove and Headquarters guns shelling beach during afternoon and evening. Burgess and Stewart took them on and kept them reasonably quiet. New troops landed during night hence necessity for no shelling.

Interview with General Hobbs in evening. Information given that on 4th, 5th & 6th inst up to 3PM a general bombardment of enemy’s position on Johnstone's Jolly and Lone Pine would take place. On afternoon of 6th inst attack on Lone Pine will eventuate. Burgess and Stewart shelling Olive Grove till 1 AM. Secured splendid specimen of shell and fuze from gun at Headquarters. It fell into the sea at Anzac and was secured and brought to me by an Infantry Admirer.