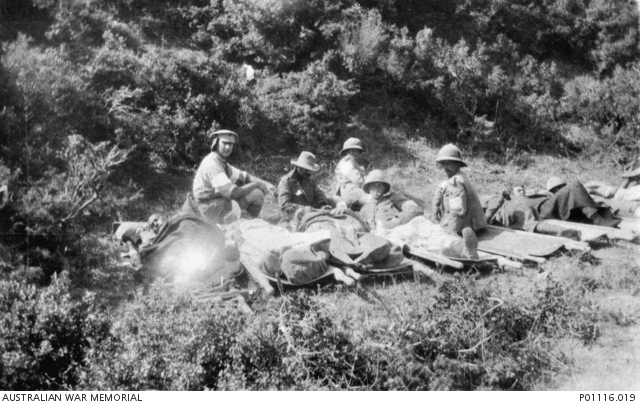 Stretcher cases after the Suvla Bay attack on the 21st August 1915, being looked over
by staff of the 4th Australian Field Ambulance - Billy & his mates of the 7th's No. 2 Gun
would have found themselves in a similar position (below).
[Courtesy of Australian War Memorial - P01116.019]

[Author's Note] At 10:30am on the 21st of August, Billy's No. 2 Gun engaged the Turkish artillery position on Gun Ridge - the two opposing Batteries had traded fire on numerous occasions, & were well known to one another.  Two days earlier on the 19th August, the Turks had successfully ranged the 7th's No. 2, landing a shell inside the gun pit which punched a gaping hole in the 18 pounder's shield.  After No. 2 was withdrawn for the day on the 20th August for repairs, Billy re-entered the pit with his detachments to engage their usual counterpart on the 21st August, knowing full well their exact position had now been calculated.  After firing their third round at Gun Ridge for the morning, the Turkish Battery replied, striking the gun with a H.E. shell - the subsequent explosion peppered Billy, & Gunners Clark, Mann & Stormonth, with fragments of shell casing & broken shards of their own gun.

Badly wounded, Billy was transferred from the gun pit to the Casualty Clearing Station, where he was spotted by fellow 7th Battery Gunner George Shields, who wrote home, "When taken to the dressing station he [Billy] was unconscious but I went down later on he waved his hand to me so I took word back to the boys that I thought Will would  pull through."  Taken on board the Hospital Ship Arcadian, the same vessel that had entered the Gallipoli Campaign as the Headquarters Ship, Billy's injuries were dressed as best as possible for the journey away from Gallipoli...

It was a little warmer today although it became cool. We had another misfortune this morning. The enemy got on to our No 2 Gun rather badly and four men were wounded – 3 were fresh men up from the B.A. Column and the other B. Pacey an old Battery man was I’m afraid mortally wounded. He was badly cut about – the result of a burst from a high explosive. Late in the evening there was as big advance on the left and a number of trenches taken by our forces. As can be understood we are all hoping that the forward movement will continue so as to allow us to move on to finish this campaign against Turkey.


Another casualty list at 7th Battery this morning. A H.E. shell struck side of gun itself and bursting wounded 4 men out of the detachment of 5, two dangerously. Gun itself has been badly dented and is permanently out of action. Arranged about overhead cover for 7th battery guns, and gave instructions for old casemate to be dismantled and timber to be secured. Hope to make cover that will be proof against H.E. shell. A big movement commenced on the left this afternoon, the objective being W. Hills near Chocolate Hills. A heavy Artillery bombardment commenced at 2.30PM and continued till 3.30PM, then for the rest of the afternoon and evening the heavy roll of musketry could be heard. We saw troops here withdrawing from Pine Ridge, evidently to reinforce the Left. This zone very quiet all day. Completing new Dugout at Headquarters for Adjutant and Orderly officer. Lowland batteries have now left us. Their camp was left in a filthy condition and ammunition lying in all directions. However they are very short handed through sickness, and have had no reinforcements. Lt Hogue LH, asked me if when a suitable time offered I would give him particulars of the work of Artillery here for a book he is to publish. I agreed. We complete tonight our 18th week here. I inspected Leane's Trench and Tasmania Post. Excellent trenches have been made in each position.