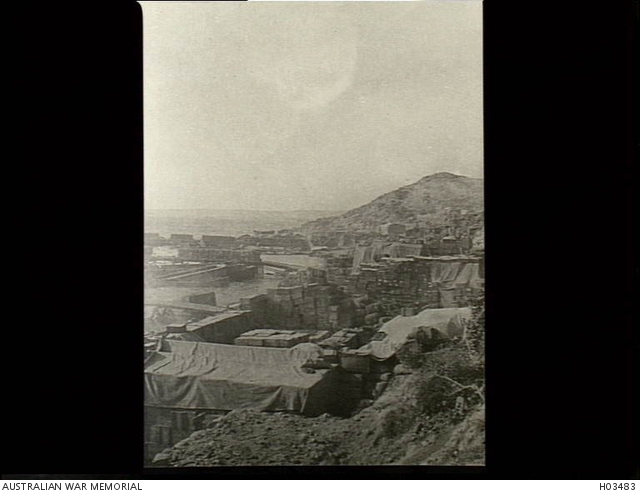 Reserves of general supplies stacked on the beach just before the start of the
August operations by Allied troops.
[Courtesy of Australian War Memorial - C01464]

Our aeroplane came over first thing this morning and made towards Maidos, a little later a German Taube made its appearance and our chap got up very high and went after the Taube.  I watched them till they both went out of sight towards C. Helles.  There was 5,000 fresh troops landed last night, while they were on the beach the enemy put five shells along the beach, wounding several. There was a demonstration by our chaps last night so as to draw the enemys fire.  Red and green flares were fired into the air, the enemy opened up with bombs and rifle fire.  The enemys biplane came over this morning and our chap made his appearance a little later but they both went out of sight.  Later on our aeroplane came over and did some spotting for us. Our lookout man reported the Turks moving along their trenches; so we pumped shrapnel into them and got some good shots in.  The enemys trenches are full of troops. They must be either going to attack or know we are going to; for in the very near future we are going to make a big advance.

Felt very bad today. Stomach and head trouble. Every preparation is being for an advance. Instructions as to water bottles and rations. Everyone to have a distinguishing marks of white cloth on back and arm. The enemy seemed to have an idea that troops were landing last night and they put a good many shells towards the beach and only one of them did any damages and it got 7 victims – all killed.

1645 No 3 Gun fired 8 rounds at gun Square 68.R Southwest corner.  Fire was stopped on a Taube flying over.


Enemy’s artillery very quiet until 4 o’clock this afternoon when Olive Grove opened briskly. Interview with Gen Hobbs and Brigade Commanders at 8th Battery at 12 noon. General Bombardment again carried out, more ammunition being used than was allotted. More men arrived last night (Kitchener Army) also more men for 3rd F.A. Brigade. Sent a message to Divisional Head Quarters that "North Lancashires" had selected a bad spot for Bivouac on the Southern slopes of MaCay’s Ridge just under Burgess 3 & 4 guns. They will surely get Olive Grove, H.E, and shrapnel shell directed at these guns. Major Burgess warned them personally. At 9 AM this morning had O.C.s to my Head Quarters and went through Operation Orders with them. Received orders from 3rd Infantry Brigade at 5.15PM, and issued my own orders for tomorrows work at 7 PM. Had a little extra cover put over my "Dugout" in the shape of sandbags. Telephone Communication with new DA position established. Orderlies arranged for tomorrow for DA, Bde Hqs and Batteries in case of break down of Telephone lines. Gunner killed at 7th Battery.