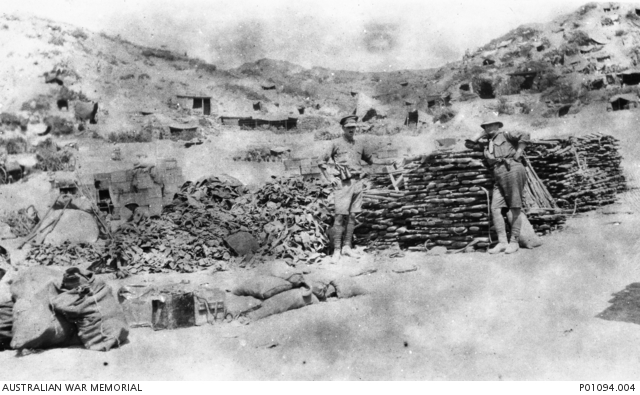 "Captured rifles, ammunition etc. after August battle" - the 'pallet' being leaned on by the
soldier at right appears to be constructed of thousands of rifles.  Col. Rosenthal mentions
the capture of 1,000 rounds of 75mm artillery ammunition.
[Courtesy of Australian War Memorial - P01094.004]

The battle is a little easier on this flank this morning but they are still at it on the left flank and the centre.  We (7th Battery) got great praise from the General and Brig. Gen. Hobbs was round today and gave us great praise for the work we put in yesterday and our gun team and No. 4 gun team were mentioned in dispatches.  The Brig. Gen. of the Light Horse says that we are the only battery here and the work we put in yesterday was simply marvelous that we stopped the Turks retaking the Lone Pine and inflicted terrible losses on the enemy.

The burst of the screaming shells heralded the break of dawn. It was a bit misty looking and no doubt the discharges from the shells would account for this. Reports received so far state our men are fighting magnificently. In the afternoon we witnessed a race between one of our aeroplanes and a German Taube. Our aviator made a great dash at him but the Taube is a fast machine and made good his escape. It was exciting to see our [illegible] circle above him before he pursued him and of course his action was to gain an advantage of height.

Damage to Gun pits was repaired during the night.

1500/1700 7 rounds fired over same zone to check movement + 9 rounds were fired under observation of forward observing officer at LONE PINE at Eastern slopes of that position.  Results doubtful.

A very quiet night. Very heavy fire early this morning. Our Left Flank heavily engaged. 2nd Artillery Brigade did great execution among massed enemy. Gen Hobbs informed me we captured 1000 rounds of 75mm Ammunition. Capt Waite carried out two series in conjunction with Lieut Turner, just in front of new position Lone Pine and in gullies Northward. General Hobbs at 9th and 7th Batteries. Conveyed General Birdwood’s thanks and his own to all ranks and to myself personally. Generally very quiet on Right Flank during day. Enemy has evidently all he can do on the left. Assisting N.Z. Artillery with horses. Had four wounded yesterday moving their guns on left Flank. Aeroplane series for Miles this afternoon against Boghali. While this series was in progress a hostile Taube came over but was promptly chased and forced to the ground by our machine. I think my Adjutant was up spotting. I shall be pleased to hear his version. Laid down platform for No 1 Gun 7th Battery. Emplacement now practically completed. Sent in full report of previous 3 days operation. Recommended Capt Waite for the Military Cross.