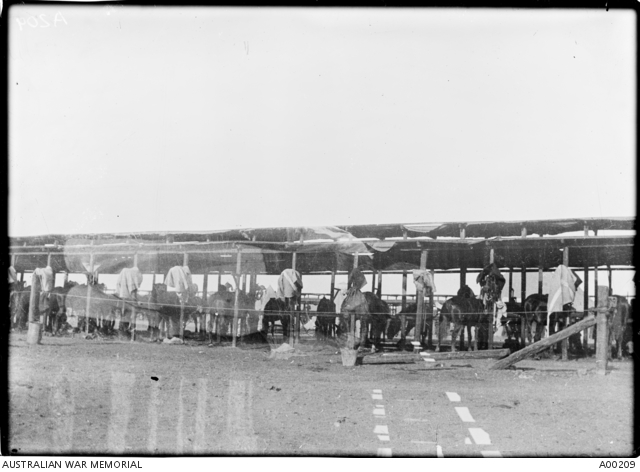 The stables of the 9th Light Horse at Heliopolis near Cairo - possibly visited by
Major Rabett on his recruiting drive for the 4th Division Artillery (below).
[Courtesy of Australian War Memorial - A00209]

Left camping ground & formed up as Details for the 4th Division.

Wrote to Gen. Hobbs re getting from 1st DA certain N.C.Os. and men to be given commission in 4th D.A. He refused to let either N.C.Os. or men receive promotion. Received report from Major Rabett re recruits in Cairo from Light Horse etc. Prospects good, but great difficulty in overcoming Departmental red tape regarding the transfer of men, and movement to Tel el Kebir.

Received congratulatory cable from Edith Halford also one from George. He has not received my first letter offering him Commission. Have written him again, also his CO to allow him to accept and get out quickly.

Letter from Gen. Cox saying he will spend next Monday morning with our men of 4th Div Arty Wrote to Brigadier of Infantry Brigade 4th Div., re transfer of suitable men to 4th DA.