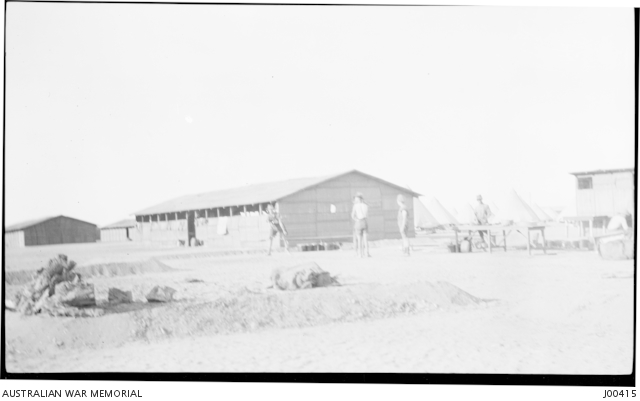 The isolation camp at Moascar, the site of the training area for the 1st and 2nd
Australian and the New Zealand A Divisions, 1916.
[Courtesy of Australian War Memorial - J00415]

Visited Moascar during morning. Arranged with Gen. Johnstone re taking over New Zealand guns, and also re Col Waite and his officers being given an opportunity to see 4.5" stripped by Armament Artificers. Half his officers are to go down tomorrow and remainder on Friday. Saw Major Freeman of R.F.C. Squadron attached to Anzac, also Col. Salmond, his C.O. who Commands the wing with HQrs. at Ismailia. Arranged for co-operation between Aircraft and Artillery during our forthcoming training. Called at HQrs. Anzac. Informed we are to move to Serapeum as soon as rail Transport could be made available. Stayed to lunch with Gen. Godley.

A.I.F. troops in Cairo are to take over Tel el Kebir camp, and a good thing it will be to take them away from Cairo and its environments. By far the hottest day we have experienced in Egypt.