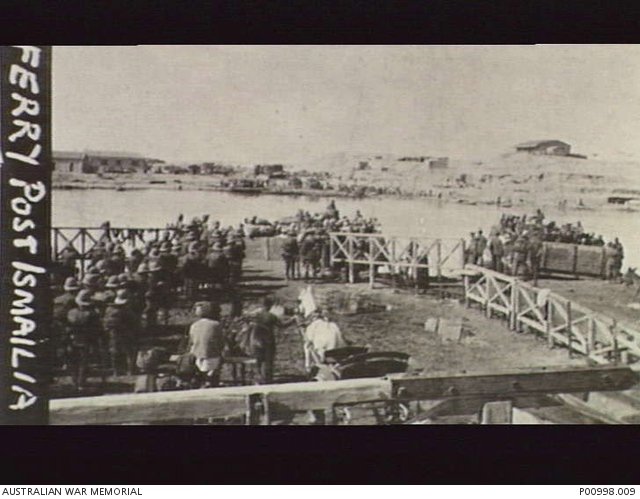 Ferry Post, at Ismailia, in 1916 - Col. Rosenthal received word that Ferry Post was
to become the temporary base of operations for the 4th Battalion (below).
[Courtesy of Australian War Memorial - P00998.009]

Batteries were reallotted as follows:-

Previous posting of Officers was cancelled and following substituted:-

Had a long conference this morning with Gen. White, Gen. Hobbs and Col. Christian re appointments to new Divisional Artillery. Gen. Hobbs was very loth to part with any officer, but eventually Major Rabett was definitely posted to me and also Lt. Richards as adjutant, while Major Caddy goes to Col. Christian. Lt. Vowles also goes to Christian but unless I am given another Brigade Commander from 1st Division I shall ask for Vowles. I hope now to get our machinery into working order and make a definite start with training.

I am told I am to have some men from 2nd Remount Squadron so I shall go into Zeitoun tomorrow to inspect and select. New Camp Site fixed for 4th Div. Artillery.

I am informed 1st and 2nd Divisions will leave almost at once while 4th Division will for the present take over FERRY POST Station at Ismailia, and 5th Division ditto at Serapeum. I presume when all danger of a Turkish attack is over we too shall move to France.