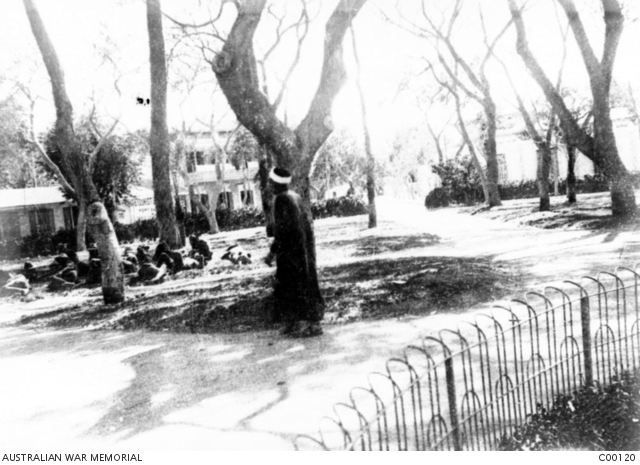 Strange cases of taking their life over on the Peninsula. "Four Feathers" one Naval Marine about 20.

Called on General Cox this morning. I found he was going to Ismailia by the midday train to see General White, and he asked me to go with him and jointly try to get details regarding the 4th Divisional Artillery finally settled.

Gen. Cunliffe Owen and Colonel Elliott RE accompanied us in the train. Had ¾ hour with Gens. Cox and White. Was definitely informed that 12th Brigade was to be handed back to 1st Division, but that balance of Officers, NCOs. and men were to remain with me unchanged. I pointed out that 1st Division was keeping six Majors while Col. Christian and myself were getting none. Gen. White said he would give instructions that some allotment of Majors should be made to the new Divisions.

Copied out particulars re Artillery Division from Gen. White’s Part VII. Had a very pleasant walk through the avenues in the Gardens and went to the Jetty and listened to band playing on H.M.S. Sir Thomas Picton". Met Colonel Holland of Sydney and his son. Had dinner on the train on the journey back. Met Colonel Grimwade on board. On reaching my tent I received a signal message from Gen. Hobbs asking that Lieut. Garling should be sent back to 1st Division. As he had been officially posted to 4th Div. Artillery I would not consent to handing him back without authority from Head Quarters. Col. Christian spoke to me on the phone. He is going to see General White tomorrow morning.