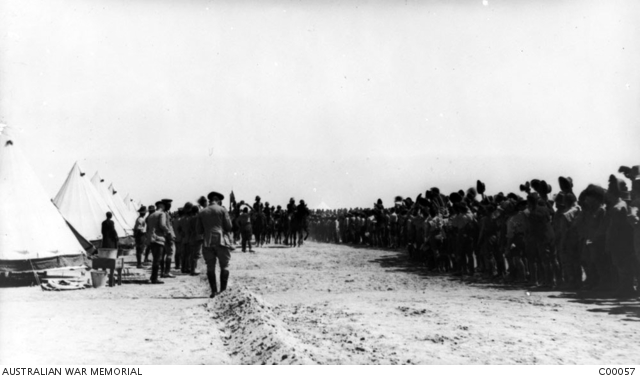 AIF troops raise their hats and give a hearty cheer to His Royal Highness Edward
the Prince of Wales as he reviews them at a camp in Egypt, 22nd March 1916.
[Courtesy of Australian War Memorial - C00057]

The Prince of Wales inspected camp. He was accompanied by Gens. Birdwood, White, Cox and McKay, together with plenty of staff. He is a very shy boyish individual. Gen. Birdwood presented me to him, and I in turn presented my Brigade Commanders. Gen. Birdwood in a few nicely chosen words told of the doings of myself and Brigade Commanders at Gallipoli. Our men made a very good showing, the Prince wanting to know why they were in helmets instead of hats. The innovation is only for the summer while drill jackets are being worn.

Paid over all Brigade funds of 3rd FA Bde to Col. Burgess and received his receipt. The 3rd Brigade struck camp and departed. Col. Rabett’s Brigade (the 12th) took over all equipment etc., and as soon as the site is thoroughly "sunned", the 11th Bde will take over. Engineers are erecting meat safes for all Batteries.