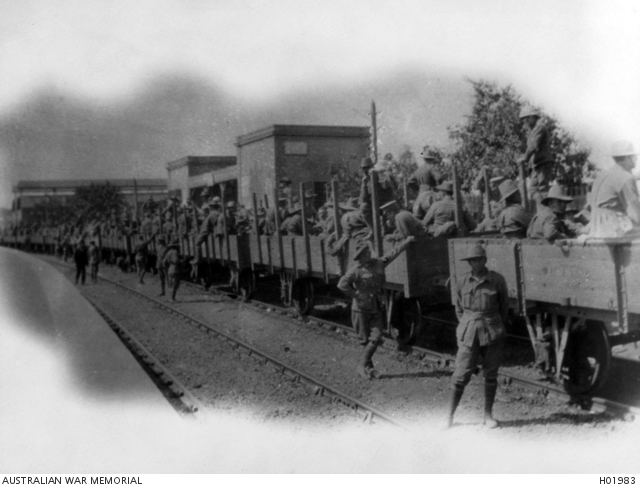 As Col. Rosenthal's Officers return from Cairo after their most recent recruiting visit
amongst the Light Horse, the men of the 1st Division entrain at Cairo's Central Railway
Station for the long journey to redeployment in France - 16th March 1916.
[Courtesy of Australian War Memorial - H01983]

Forwarded list re "Anzac Book" to Capt. Bean from all units at Tel el Kebir Camp. Inspected some 200 men of Gen. Monash’s Brigade. Major Waite given leave for week and Major Rabett came down from Cairo with Lt. Sutton re Light Horse transfers etc. Discussed details fully with him. Expect to get about 1200 men from Light Horse during next few days.

Gen. Hobbs to day had a nasty fall from his horse.

Instructed Capt. Parry Okeden that HQrs. had ordered his return to Australia. He asked to be allowed to resign here, and I recommended that course to the General.