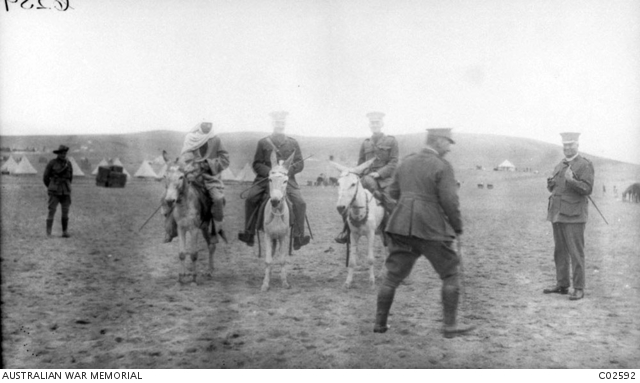 Major Reginald Lee Rabett (centre, donkey), 12th Australian Field Artillery Brigade,
doing his rounds on a donkey at Mena Camp in December 1914 - by March 1916, he
was lobbying Col. Rosenthal for a position in the 4th Battalion & a possible promotion
in rank (below).
[Courtesy of Australian War Memorial - C02592]

Rabett called to see me during morning and stated Gen. Hobbs had sent for him, showed him a wire from General White asking for Rabett and Olding to be transferred to 4th Division. Gen. Hobbs gave Rabett a chance to come and see me to ascertain what appointment he would have if posted to 4th Div. I told him he would have a Brigade, so he has told the General he has decided to accept.

Prepared plans of Camp Site for whole Division. Major Rabett posted in orders to 4th Division and he will therefore not now be passed over by other Officers of 1st Division.