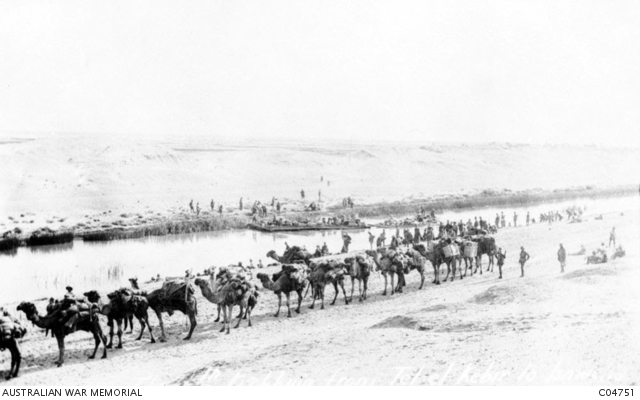 Camels and rafts, during a trek from Tel-el-Kebir to Ismailia - Col. Rosenthal photographed
similar, with a plan of transporting the 4th & 5th Divisions to the Canal (below).
[Courtesy of Australian War Memorial - C04751]

Friday 24th March
Again at HQrs. 4th division re reinforcement Officers. No authority through from Anzac as to their future. Moved over on to ground latterly occupied by General Hobbs and established office. Convened Field General Court Martial re one of Col. King’s men. Heard at HQrs. that I have to take over two 18 pound How Battery at Moascar, Ismailia. At Col. Duncan’s request I put in a strong minute showing why it would be inadvisable to do so and how much better for the training of 4th Div to send guns to Tel el Kebir, allowing us to continue training here, unless tactical consideration absolutely compel us to go to the Canal. The whole of 4th and 5th Divisions are ordered to Canal, but I think the Artillery will remain here for the present.
Took photos of a huge crowd of camels here today. They are to be used in Transporting 4th & 5th Divisions to Canal.