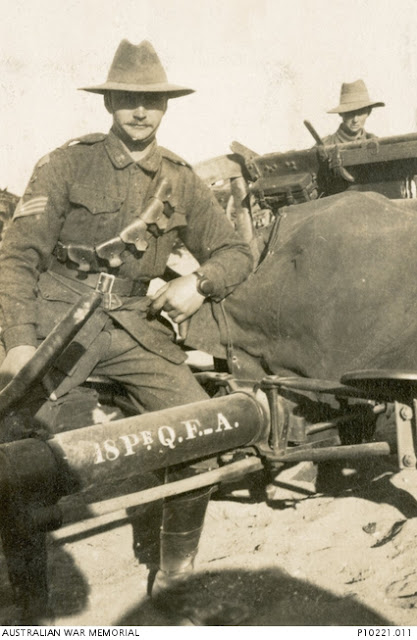 Appointed Staff Sergeant in the 11th Battery of the 4th Field Artillery Brigade, Herbert
William Pickett is seen above sitting astride an 18 pounder Q.F. artillery piece in Egypt
in early 1916 - the 7th Battery come 11th, of the 4th Division Artillery, were still waiting
for artillery equipment on the 17th March 1916.

Received letter from Charley. Inspected 400 men of 12th Infantry Brigade and had them transferred this afternoon. A few men reported from 1st D.A.C. Rabett returned to Cairo. Sent Col. King to Serapeum to show New Zealand and Argyleshire Artillery our forward positions selected for our Artillery. Evidently it has been decided for us to remain here to fit out & train.

We shall be well satisfied. Interviewed some very likely N.C.Os. from Light Horse who are desirous of obtaining commissions, also Lt. Copley 5th L.H. and two Infantry Subalterns.

Had copy of letter from Gen. Birdwood sent to me, showing that he has asked M.E.F. for 8 Majors or Captains for 4th & 5th Divisional Artillery. Capt. Parry Okeden ordered to return by "Demosthenes" to Australia leaving Suez on Sunday.