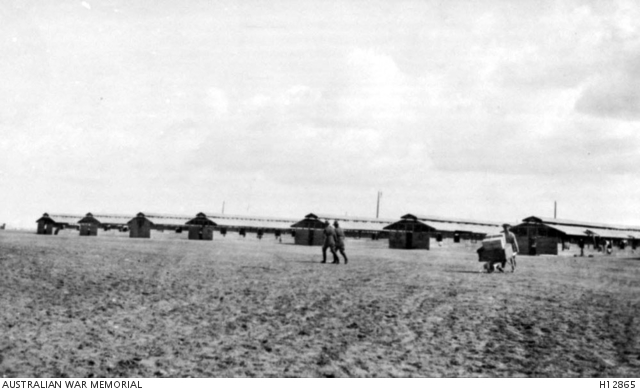 Sleeping huts at Zietoun in 1916, the camp to which Col. Rosenthal hoped to send
200 recruits for the Artillery Depot (below).
[Courtesy of Australian War Memorial - H12865]

Received note from Gen. White this morning re Major Waites promotion. I immediately went to Ismailia, saw General White, and got the whole matter settled. Major Waite is to receive his promotion in orders tomorrow to be appointed to the Command of a Brigade. Gen. Hobbs has been trying to get Major Spurge appointed, but I managed to give such information as left Gen. White no alternative but to appoint Waite. I tried hard to arrange that 4th Div Arty should remain at Tel el Kebir. Will hear definitely in a few days.

Lt. Holdgate handed over to me from 1st Div. under arrest, pending settlement of enquiry re his conduct. Received instructions to send to Zeitoun 200 odd reinforcements for Artillery depot there. Lieut. Hobson and others gazetted.