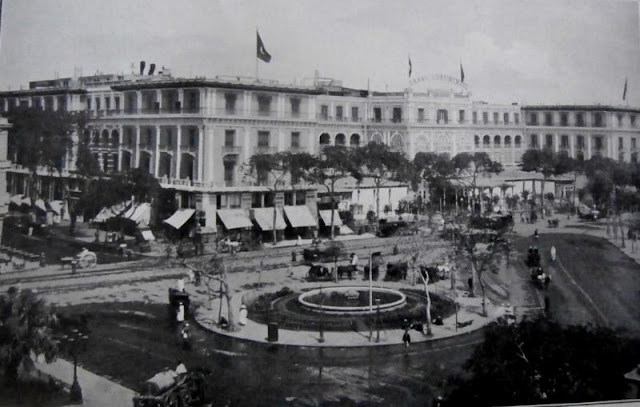 The Continental Hotel in Cairo, where Col. Rosenthal took residence for the night
on the 2nd January 1916 (below).
[Courtesy of heathcaldwell.com]

We arrived in Alexandria Harbour about 8am. It rained during the evening. The water in the Harbour was alive with gulls. How they soared & chased each other round & round to their merry little squeak. The Tunisian anchored & a rumour is current on board that a Transport called the Sultana ? was submarined just behind us last night. We had a lot of waiting to do as usual before we got any instructions. At last we got ashore with our baggage etc & then we had to wait till well on 8 PM before we could get a train. I saw Col Rosenthal & also young Charlie Fortescue who had both returned from England the same day as we arrived in Alexandria. We bundled our stores etc on to the train in the baggage van & I and my party travelled with it. (Nigger & Whisky for 4/6 – Water) It was a tiring journey & it was about 4 in the morning.

Moved into berth in inner harbour early in the morning. No information as to our movements till after lunch. The "Tsinan" moored alongside us with Australian troops from Gallipoli on board. One of my Headquarters Sergeants happened to be aboard her and saw me on my ship. He sent round to me to say he had all my Gallipoli baggage and samples of shells and fuzes for which information I was very grateful. Received word to catch 4 pm train for Cairo. Arrived Cairo at 7.30 PM Went to Continental Hotel. Reported to General White Army Corps H Qrs at Shepheard's Hotel. Stayed night at Continental Hotel. Had dinner with Major & Mrs. King. Saw a number of Australian Officers.