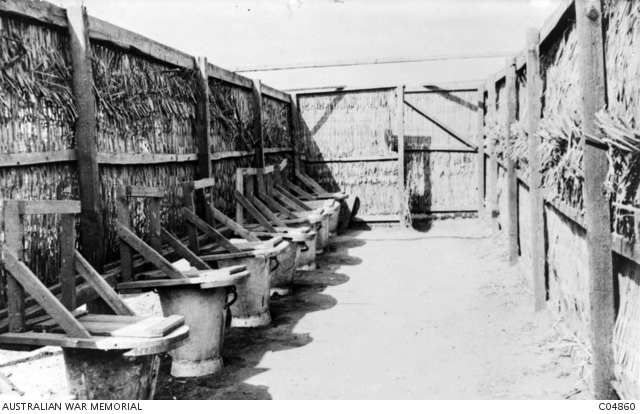 Out with Batteries during morning. Moved into old Mess tent as my quarters. Major Marks visited model Sanitary methods at Ismailia. Am informed Rosie’s husband is with the 2nd Division but have not seen him yet. Discussed trip to France with Major Lorenzo, D.S.O, and gave him a piece of ribbon. He invited me to dinner on Monday evening next. Wrote Nell and family. Big bundle of letters from England.

Gunner Hugh Grylls, formerly of Warwick, and now of the 7th Battery, writing from the Australian Intermediate Base, Cairo, under date 20th January, 1916, says :-

I had intended to write several times, but during the whole time I was on Gallipoli Peninsula my opportunities for doing so were limited, and since I returned to Egypt my time has been so filled up in having a good fly round (barring the period during which I was in hospital) that my correspondence was neglected. War in itself is a very rum affair, and I found it the exact opposite of what I had imagined. It is not half as black as it is painted, and taking it all through I rather enjoyed the months I put in on the Peninsular. What used to worry me more than the shells, bombs or bullets were the vermin. Of course, we had some very rough times especially in August, when guns and men were blown to blazes, but taking matters en bloc I shall always have a warm spot for Anzac, for there I made some excellent friends, and in addition, further cemented previous friendships. Active service is the test of both men and friends. For instance, if a man is feeling off color it is a friend indeed who comes to him and says, "Here old man, I'll take your watch to-night," and in many cases the volunteer is both sick and short of sleep himself. These little acts often take considerably more doing than others, which sound much more heroic, but which are performed under the stimulus and excitement of a ding-dong scrap. Personally I consider that I was pretty lucky to put in over four months at Anzac, and come through alive, especially in view of the fact that at various times I was knocked out by the concussion of a shell (without receiving a scratch by the way), had my left shoulder strap shot through, and received two minor flesh wounds. I also had an attack of dysentry in August but was lucky enough to get over it without having to go away. Finally, I was invalided away in November with jaundice, rheumatism and a bit of a shrapnel scratch, and though I have got rid of the jaundice the rheumatism refuses to be shaken off, consequently, when I was discharged from hospital I was put to Class "B," that means that I was unfit (for the time being at any rate) for active service and only fit for "light duties." So at present I am away from my unit, and have been put in charge of the artillery papers at the Australian Intermediate Base Headquarters, but I am living in hopes of once more wielding the sword (or, I should say, gun in my case) instead of the pen in the very near future. Though I am now Iiving in quarters in comparative comfort, I would much sooner be with my old pals of the "right of the line and the pride of the army," to wit the artillery. I have run across several Warwickites at one time and another, the last being Mal. McDougall, who is in No. 1 General Hospital. He had a fall from a horse just about Christmas time, and was in bed when I saw him just a little over a week ago. It is nothing very serious, and he will soon be out again. I have also seen Chambers several times, and he does not look quite as fit as he used to. He is a full blown Captain. Receipt of mails is very irregular, but this week I was very glad to get some. I have been rather worried as to how my two brothers were getting on in France, and was very relieved to hear that up to the middle of December they were quite alright, though one of them had been buried in a trench for two hours. He has also been mentioned for bravery under fire, so for a youngster of twenty-one he's not doing badly. I hear that Dave Pugh is here with the Remounts, but have not run across him yet. By the way I have seen Sister Smith several times since my return and she is looking very well. She tells me that Egypt suits her down to the ground. I also saw and spoke to Dr. Mckenzie (late of Warwick Hospital) at Anzac the day I came away. He had just got over with a field hospital, and was grumbling because he had not been sent before. Gunner Grylls concludes his interesting letter by offering his kind regards to all Warwick friends.

Published in the Warwick Examiner and Times, on the 15 March 1916.
[Courtesy of National Library of Australia - TROVE]