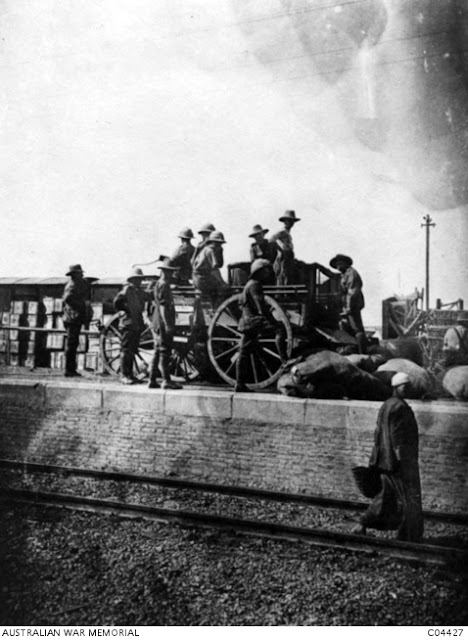 Unloading stores at the military siding at Tel-el-Kebir, alongside
which the 7th Battery were camped.
[Courtesy of Australian War Memorial - C04427]

Reported to 7th Battery to-day and placed in "B" Sub. I applied for leave & got 48 hrs & went up to Cairo. Met Dutch lady & Gent & family. Incident re biscuits. Stayed at Eden Palace Hotel.

Wednesday 5th January
Called at Divisional Head Quarters re position of Artillery Command. Informed each Brigade Commander was to act independently and in direct Communication with DHQ. Major Anderson to be temporarily attached to DHQ until further arrangements are made. Saw Colonel Christian. Stated he was in Command of Div. Artillery. Above ruling upsets this suggestion. Had a ride on Jack. Both my horses looking very well. Very cold weather. Quite wintry. Mess being run very well. An excellent cook was made available from 8th Battery. Overstrength both in men and horses at present time.