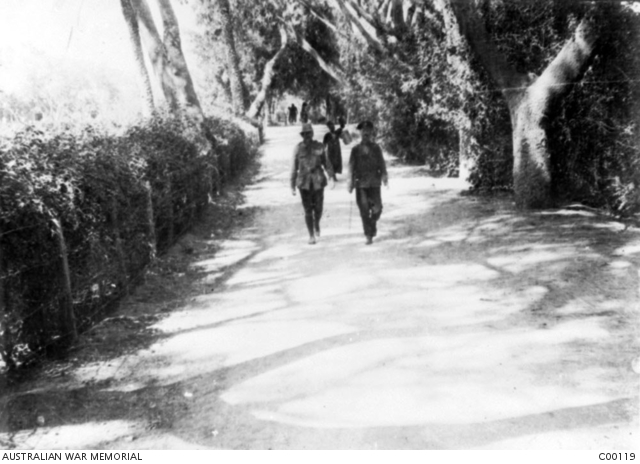 The road alongside the 1st ANZAC Corps Headquarters at Ismailia, visited
by Col. Rosenthal (below).
[Courtesy of Australian War Memorial - C00119]

Interviewed Gen. Cox re formation of new Division and obtained his consent to proceed to Ismailia to see General White and get a clear understanding regarding the whole scheme. Saw General White who approved my method of putting a trained neucleus to each Battery and Brigade. He however told me it was now decided to have 4 Battery Brigades, and in addition a 3 Battery Howitzer Brigade to each Division. The 1st Anzac is to leave very shortly, and Gen. Hobbs and Col. Johnstone are being asked if they can raise the Divisions to the new establishments without recalling the personnel just transferred to 4th and 5th Divisions. Both Gen. White and Gen. Birdwood are decidedly against the return of the personnel to the parent units, but still if time will not permit of the new establishment being raised, this personnel will possibly be asked for.

On my return to my Head Quarters I informed the Brigade Commanders confidentially of what I had heard. Our Battery numbers will now be altered, but possibly the Brigade numbers will be retained.

Gen. White informed me I may have some difficulty in securing George Halford’s appointment as A.D.C., because of his not being an Australian, but as the appointment is a personal one I think Gen. Birdwood will allow it, particularly in view of the number of officers required under the new organization. Court Martial on Capt. Parry Okeden commenced. Col. Grimwade (President) was not present at appointed time, and orderlies had to search everywhere for him. He had received no intimation of his appointment to the Court.