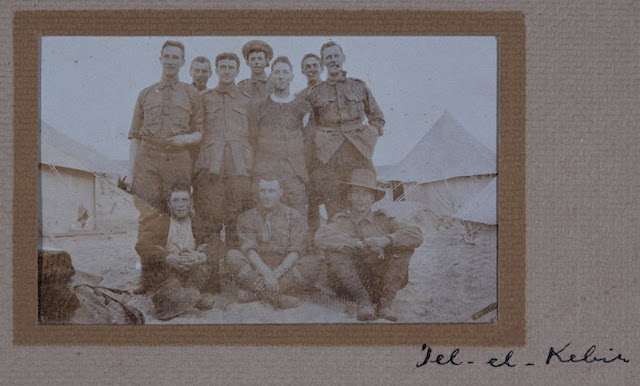 A group of Australian Soldiers posing within the camp at Tel-el-Kebir, 1916.
[Courtesy of Museum Victoria]

Brigade and unit Commanders paraded to General Hobbs. He gave us details of new Divisional Artillery. I am to Command 4th Division, Col. Christian the 5th. The 3rd Brigade is not now to form a definite part of the new Division but is to be lent temporarily to assist in the Organization. Brigade Commanders have now to submit recommendations to General Hobbs for appointment of officers and promotion of N.C.Os. and presumably the new allotment of Officers, NCOs. and men will be made almost at once. I have written to George Halford offering him the appointment of A.D.C. and have also recommended Capt. Waites for Brigade Major and Lieut Forrest as Staff Captain.

Was informed this evening that recommendations for my Brigade Commanders are Major King, Major Hughes and Lt. Col. Tunbridge with the following Battery Commanders for Colonel Tunbridge:- Capt. McLaughlin, Capt. Riggall and Capt. Jopp. I expect there will be some heartburnings over the new selections and appointments. I have written to Colonel Buckley for a complete supply of military books etc.