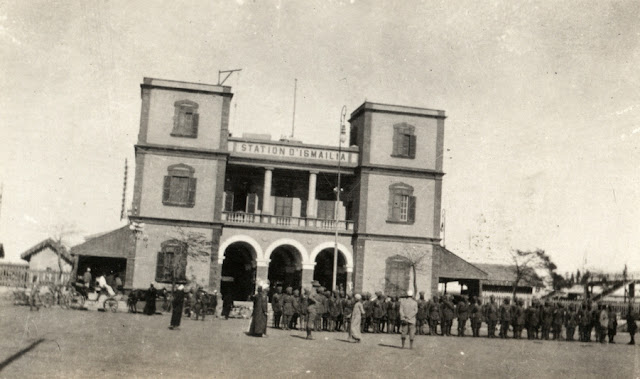 Camp Station, Ismailia - where Col. Rosenthal spent the night on an impromptu bed of hay.
[Courtesy of WikiMedia Commons]

Made a reconnaissance during the morning of extreme southern portion of 3rd Brigade Training Area. Orderly brought me word that we were to proceed by afternoon train to Serapeum. (Brigade and Battery Commanders, Adjutants, range takers orderlies horses etc. By dint of a great deal of bustling we left Tel el Kebir at 5 PM, reached Camp Station Ismailia about 6.30, and there discovered no connection had been arranged for between Camp Station and Serapeum. On consulting the D.A.D.R.T. at Ismailia we found we could get no further till 10 AM tomorrow. We therefore all walked down to the French Club at Ismailia (of which all British Officers are made honorary members), and had dinner there. While at dinner Major Burgess and Capt. Forbes came in and told us of their experiences on Camels in front of our Canal line. We returned to the Camp Station after dinner and each man made up a bed for himself among bundles of hay lying on the platform. Everybody in rather bad temper and very dissatisfied with faulty staff arrangements.