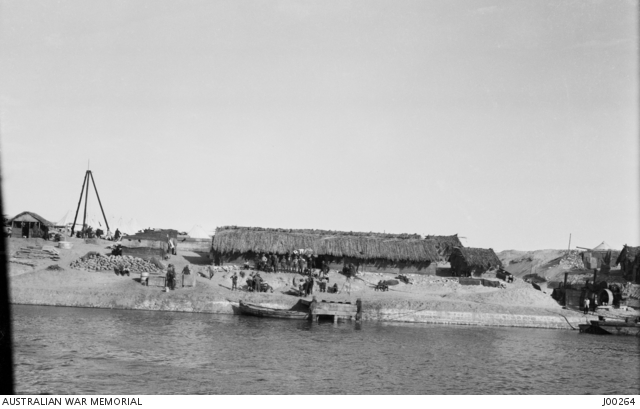 A view of the huts and activity on the shore line from across the Suez Canal, 1916.
[Courtesy of Australian War Memorial - J00264]

Moved our a lot of our gear to camping grounds Sandy Soft Valley.

Attended Conference with Brigadiers and General at 8.30 AM. He informed us we were to be ready to move to France at end of May. Balance of personnel and vehicles came into camp to day. Hope by the end of week to have everything in good working order. All leave after next Sunday stopped. Lt. Richards arrived from England. He brought me some books I had ordered. He looks very well and I am exceedingly glad to get him back. Quite a number of men from Bridging train transferred to us to day. Promoted full Colonel, and Temp. Brig. General. Published in A.I.F. list No. 50 dated Feby 21st 1916.