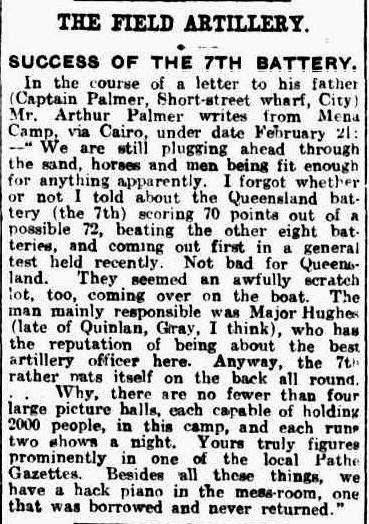 Printed letter from Mena Camp back home to Australia, dated 21st February
1915.  This was written by 15 Driver Arthur William Palmer (below), a 22 year
old Surveyor from Graceville in Brisbane, who also shipped out onboard the
A22 Rangatira with the 3rd Field Ambulance, alongside the 7th Battery men.
The letter contains details of the 7th Battery's win at the shooting trials 5
days earlier, on the 16th February - published in The Brisbane Courier
on the 1st April 1915.
[Courtesy of National Library of Australia - Trove]


"We are still plugging ahead through the sand, horses and men being fit enough for anything apparently.  I forgot whether or not I told about the Queensland battery (the 7th) scoring 70 points out of a possible 72, beating the other eight batteries, and coming out first in a general test held recently.  Not bad for Queensland.  They seemed an awfully scratch lot, too, coming over on the boat.  The man mainly responsible was Major Hughes (late of Quinlan, Gray, I think) who has the reputation of being about the best artillery officer here.  Anyway, the 7th rather pats itself on the back all round.  Why, there are no fewer than four large picture halls, each capable of holding 2000 people, in this camp, and each runs two shows a night.  Yours truly figures prominently in one of the local Pathe Gazettes.  Besides all these things, we have a hack piano in the mess-room, one that was borrowed and never returned." 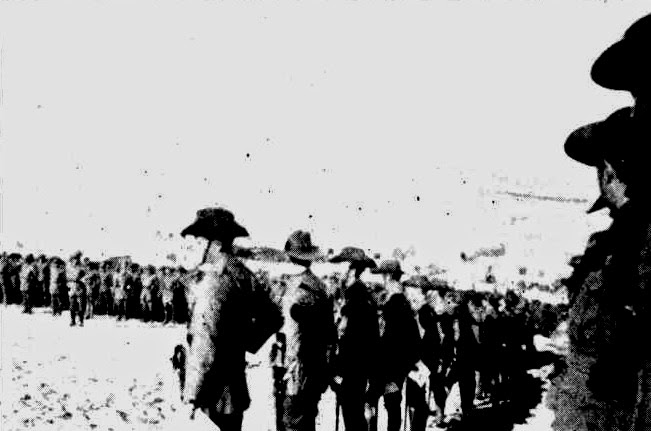 Men on Church Parade at Mena Camp, published in the Sydney Mail on the 17th March 1915.
[Courtesy of National Library of Australia - Trove]


Did not attend Church Parade. Slept in for a change and wrote letters and posted up Diary. Had a good sleep in the afternoon, quite an unusual occurrence for me.