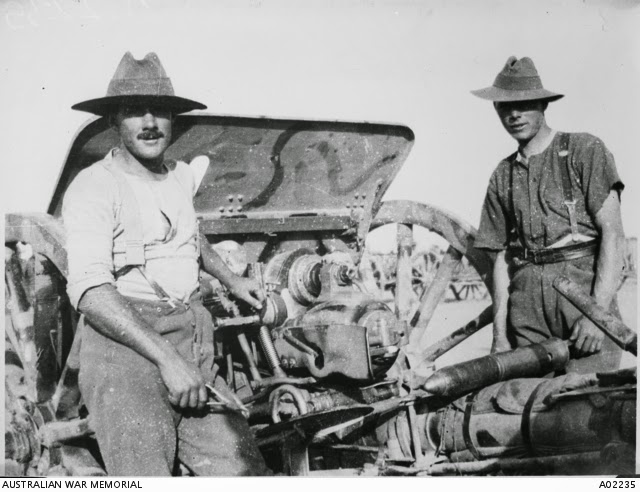 Two unidentified soldiers standing next to an 18 pounder field gun
of the 1st Divisional Artillery at Mena Camp, February 1915.
[Courtesy of Australian War Memorial - A02235]

Got back to the wagon lines at 3.45 am and after a pint of coffee a slice of cheese and some biscuits we turned in on our blankets that were bought up on the G.S. wagon.  We were up again at 6 am and after feeding the horses we had breakfast and then went over to the guns.  Our ammunition came up about 10 am and we did our shooting and a lot of the heads were up on a nob watching it.  The 9th Battery were shooting over our heads.  Our Major got complimented on his shooting.  The 7th Battery did splendid shooting.  The Major stood all hands a pint of beer when we came in this evening.  Three cheers for the 7th Battery.


[This is the end of Billy’s first diary.  The next surviving diary opens at the
beginning of August 1915, a few months after the ANZAC landings on
the Gallipoli Peninsula.  Given the lapse of time, it has always been presumed
that the ‘missing’ diary was either mislaid, was appropriated by one of
Billy’s mates at Gallipoli, or was potentially confiscated by the censors
when Billy’s possessions were finally sent back to Australia.  If any reader
has information regarding Billy’s ‘missing’ diary, or its whereabouts, I
implore you to contact me either through the Blog, or via the Facebook page.]


Stayed in camp today preparing for night March, bivouac and tactical shooting. Moved out with B.C? at 2 PM to reconnoitre positions. Selected same also Bivouac. Brigade moved out of camp at 7.30PM reaching bivouac about 9. Major Burgess placed two of his guns for night firing. The D.A.C. failed to supply ammunition, consequently night series was not fixed till midnight. Aiming point was a lamp on top of "Cheops". Zones of front allotted to each battery. (all units spent the night preparing gunpits and observing stations.) Guns in position at 10 AM. Delay in supply of ammunition from DAC caused further delay. Shooting commenced about 11 AM. Excellent results. All batteries did good work. A distinguished Party watched the proceedings. General Sir A. Maxwell, General Birdwood, Generals Walker and Bridges and the Marquis of Anglesey. They all congratulated Colonel Hobbs on the work of the 3rd Brigade, and after the shoot had a look at the Battery positions and emplacements. Returned to camp feeling very tired. Had good bath and sleep, Col Hobbs had a pow wow in the evening in our mess tent. All officers of all Brigades present. The Col was very congratulatory.