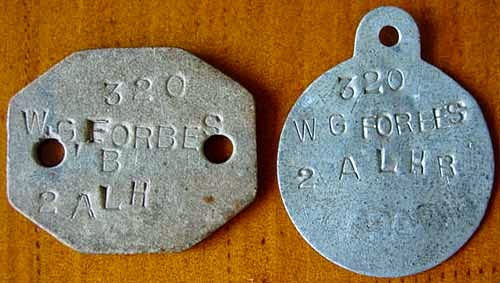 Identity discs as issued to the men (below) at Mena Camp.  The discs above
were issued to Private 320 William George Forbes, of the 2nd Australian
Light Horse Regiment - Pvt Forbes travelled to Egypt from Brisbane, onboard
the A15 Star of England, in the same convoy as the A22 Rangatira.
[Courtesy of Aerei Militari Forum]

I went out with the guns today and the same old thing over and over again, we left the guns out there with a guard over them.  There is a double guard over the prisoners now and anyone who tries to escape from the guard tent will be shot and if one of the prisoners escape the N.C.O. in charge and a man on sentry will be tried by court marshall.  Our horses are not doing to good they are mostly suffering from sand colic.  We have had our identification medals and our first aid pads issued to us tonight and we have to be in readiness to leave within 24 hours.  Out tent have had a feed of dates, cheese and biscuits tonight.

Good work on training area, engaging different targets from behind cover by Compass bearing and in the open.

Approval received to discharge several men for misconduct. Lecture to O.C.s re day’s work. Worked out scheme for Friday. Fighting on the Canal. Expect to be sent there soon. Received letter from Nell dated Dec 30th 1914.