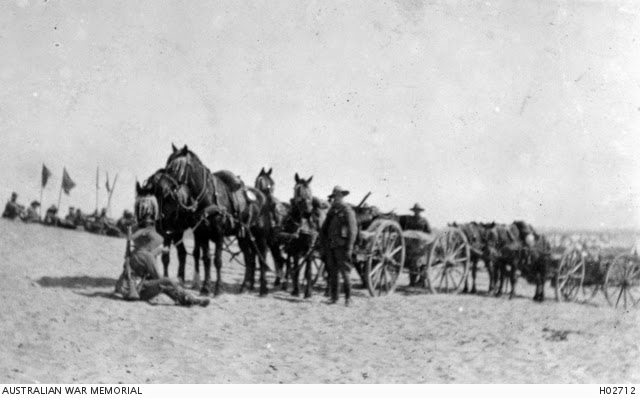 Out manouvering in our grounds today, was a fine day.  I was coverer of the firing battery wagon and its not up to much.  The coverer has to go back from the firing lines with the teams as soon as he drops the Amm. Wagon and on this job one gets no practice on the guns.  Then after we got our teams ready for coming back.  I was on the Sgts horse while he was having a bit of practice on the gun, so he wants his horse, I gives it up and had to ride back to camp on one of the team horses, bareback and it wasn’t the sweetest ride I have had.  This afternoon at mess table to of my men at my mess table started a row and it ended up a fight so let them fight it out.  One chap was the better so he knocked the other out cut his mouth and nearly knocked his eye out, of course nobody knew anything about it.

Had to lay up today. Feeling very queer. The Doctor thinks I must have received slight sunstroke yesterday. Had to provide another gun and carriage for funeral of Infantry Corporal today.

I am informed about 6 generals are to visit the Manoeuvre area today. I wish I could have been there. Major Burgess is absent too in a court martial.

Lecture given tonight at Mena House by Col Sheen on "International Law respecting war". It was very interesting. I should not have attended as I felt very rocky, and I was very glad to get to bed.