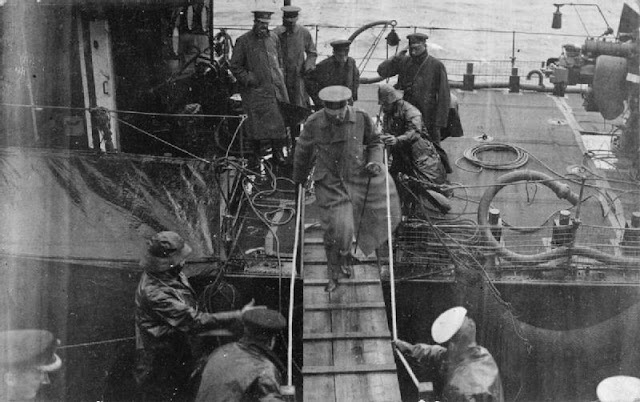 Lord Kitchener boards H.M.S. Iron Duke from H.M.S. Oak at 12.25pm on 5
June 1916, prior to lunching with Admiral Lord Jellicoe at Scapa Flow - 6 hours
later, aboard the H.M.S. Hampshire, Lord Kitchener would be lost at sea after
the vessel struck a mine.
[Courtesy of Wikipedia]

Marseille is nearing and I am just longing to see a little of France.

Early this morning we came abreast the South West corner of Sardinia, our course now lying to the westward of Sardinia and Corsica to Toulon, thence Marseilles.

French Patrol boats (3) seen this morning. Sardinia very rugged. Received wireless stating that H.M.S. Hampshire with Lord Kitchener and staff on board, had been sunk near the Orkney Islands, and apparently all on board lost. Lord Kitchener was on his way to Russia at the invitation of the Czar, to discuss military and financial problems. RUSSIA reported to have captured 13,000 Austrians.

Troops on board have now discarded their Khaki drill and have taken on their woollen clothing.
We expect to reach Marseilles tomorrow morning early.